Skip to main content
BIBLE SALE OF THE SEASON: Save on over 2,100 Bibles thru 10/26. >
Marriage and Other Acts of Charity: A Memoir - eBook
By: Kate Braestrup
Stock No: WW8049EB 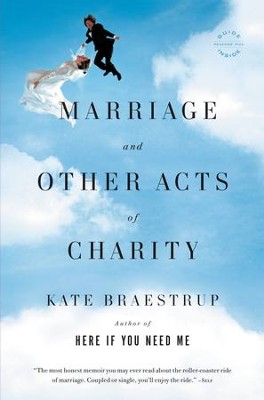 Marriage and Other Acts of Charity: A Memoir - eBook

▼▲
In Marriage and Other Acts of Charity, minister Kate Braestrup takes a look at married life after the wedding ceremony and what it means to share your life with someone for better or for worse. Part memoir and part meditation, Kate, who has been married twice and widowed once, gives her insights into married life. Hardcover.

▼▲
In her award-winning memoir Here If You Need Me, Kate Braestrup won the hearts of readers across the country with her deeply moving and deftly humorous stories of faith, hope and family. Now, with her inimitable voice and generous spirit, she turns her attention to the subjects of love and commitment in Marriage and Other Acts of Charity.

As a minister, Kate Braestrup regularly performs weddings. She has also, at 44, been married twice and widowed once, and accordingly has much to say about life after the ceremony. From helping a newlywed couple make amends after their first fight to preparing herself for her second marriage, Braestrup offers her insights and experiences on what it truly means to share your life with someone, from the first kiss to the last straw, for better or for worse.

Part memoir, part observation of modern marriage, and part meditation on the roles of God and love in our everyday lives, Marriage and Other Acts of Charity is a unique and unforgettable look into why, and how, we love each other, and proves yet again why Kate Braestrup's writing is "inspirational in the best sense"-New York Daily News.

▼▲
Kate Braestrup serves as chaplain to the Maine (Game) Warden Service. She is the author of a novel, Onion, and several bestselling memoirs. She has written for O, the Oprah Magazine, the New York Times, More Magazine and the Huffington Post. She lives in Maine with her husband, Simon van der Ven, and their six children.

▼▲
In this breezy, soft-pedaling exercise in spiritual empowerment, Braestrup (Here If You Need Me) shares some of her hard-won marital wisdom. As an ordained minister, Braestrup counsels couples to love and cherish one another, even in the face of a 50% divorce rate, and asserts that of the three kinds of love known in ancient biblical Greekeros, philos, and agapethe greatest is the last. Translated into Latin as charitas, agape is the generous, selfless love given unconditionally and best mimics the nature of God's love. Braestrup traces her own call to the ministry to the aftermath of the shocking sudden death of her policeman husband, Drew, killed in a car accident in 1996, when her family and friends rallied around her and the couple's four children with abundant love and care. She reveals that not long before his death, the couple had suffered a marital crisis and sought counseling for what the author considered clearly Drew's incurable character disorder; however, she was jolted from the brink by the thought of their losing each other. Employing examples of the couples she knows, such as game warden Jeremy Judd and his betrothed, town dispatcher Melanie, who sought the author's advice as they embarked on their marriage, as well as a soon-to-be-divorced couple, Jesse and Georgiana, Braestrup offers grains of folksy, charitable wisdom. She is comfortable discussing death (One hundred percent of marriages end), declaring that the only recourse is Jesus' message: Love more. (Jan.) Copyright 2010 Reed Business Information.

▼▲
I'm the author/artist and I want to review Marriage and Other Acts of Charity: A Memoir - eBook.
Back
Back