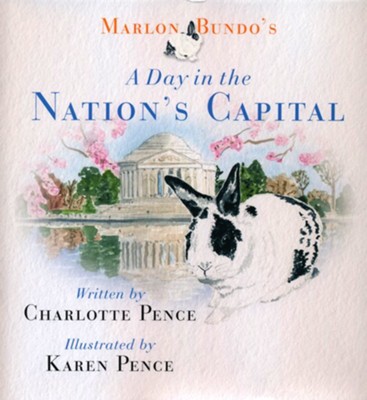 ▼▲
In Marlon Bundo's A Day in the Nation's Capital by Charlotte Pence, and illustrated by Karen Pence, Marlon Bundo is the Vice President and his wife's pet bunny and he is excited for a trip around the Capital to learn more about the founding principles that made and make America so special. Join Marlon as he visits the White House, the Lincoln Memorial, the Library of Congress, the National Archives, and more! Includes a glossary in the back explaining the important places and monuments, plus a bibliography. Hardcover.

▼▲
Karen Pence, wife of Vice President Mike Pence, is a mother, educator, and award-winning watercolor artist. As second lady of the United States, Mrs. Pence works to bring attention to art therapy and to the sacrifices made by military service members and their families. She earned a BS and MS in Elementary Education from Butler University in Indianapolis. Mrs. Pence and Vice President Mike Pence have been married since 1985 and are proud parents of their adult children, Charlotte, Audrey, and Michael and his wife Sarah.

Charlotte Pence is the bestselling author of Marlon Bundo’s A Day in the Life of the Vice President(Regnery Publishing, 2018). Her first solo book,Where You Go: Life Lessons from My Father(Center Street, 2018) was released in October and reveals lessons her father, Vice President Mike Pence, has taught her. She is a current contributor to Lightworkers.com and her work has been published in Glamourmagazine and featured in US Weekly, among other major media outlets. A graduate of DePaul University with a BA in Digital Cinema Screenwriting and English, Charlotte contributed writing and production skills to the Emmy Award-winning documentary, Fleeced(WFYI Productions). Charlotte currently attends Harvard Divinity School where she is a candidate for a masters in theological studies with an emphasis on religious themes in literature and culture.

▼▲
I'm the author/artist and I want to review Marlon Bundo's Day in the Nation's Capital.
Back
Back