Mark's Story: The Gospel According to Peter - eBook
By: Tim LaHaye, Jerry B. Jenkins 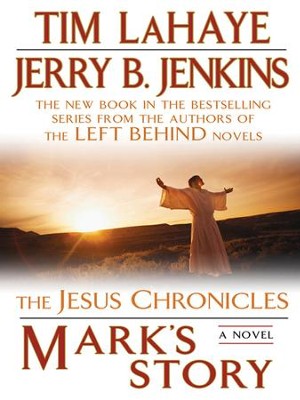 Mark's Story: The Gospel According to Peter - eBook

▼▲
Mark chronicles the growth of the early Christian church, the struggles of Jesus' followers, and the persecution they endured from a hostile world. Mark's Story is a thrilling account that vividly depicts the last day before Jesus' crucifixion and the danger that early believers faced as they boldly proclaimed Jesus as Christ the Lord. Their bravery laid the foundation for the early church, and their fervent passion for the Word reverberates throughout the world today.

▼▲
The thrilling new novel of the Jesus Chronicles from the authors of the multi-million bestselling Left Behind series.

The phenomenal multi-million-selling Left Behind series has won legions of fans. Now Tim LaHaye and Jerry Jenkins give us the second book in their bestselling Jesus Chronicles-biblically inspired novels that bring to life the story of Jesus as never told before.

Mark's Story is a thrilling account that vividly depicts the last day before Jesus' crucifixion and the danger that early believers faced as they boldly proclaimed him Christ the Lord. Readers will discover firsthand the growth of the early Church, the struggles of Jesus' followers, the persecution they endured-and their bravery and passion, which laid the foundation for the Christian Church and still reverberates throughout the world today.

▼▲
Tim LaHaye is a noted author, minister, and nationally recognized speaker on Bible prophecy. He is the founder and president of Tim LaHaye Ministries, and the cofounder of the Pre-Trib Research Center, established for the purpose of exposing ministers to Bible prophecy. He holds a doctor of ministry from Western Theological Seminary and a doctor of literature from Liberty University. A pastor for thirty-nine years, LaHaye has written more than fifty nonfiction books and co-authored the Left Behind, the most successful Christian fiction venture in publishing history, with Jerry Jenkins.

Jerry B. Jenkins, chairman of the board of trustees for the Moody Bible Institute of Chicago, is the author of more than 175 books. Dr. Jenkins's writing has appeared in Time, Reader's Digest, Parade, Guideposts, and dozens of Christian periodicals, and he is a contributing editor to Writer's Digest magazine. He owns Jenkins Entertainment, a filmmaking company, as well as the Christian Writers Guild.

▼▲
Tim LaHaye and Jerry B. Jenkins pair up once again for the next book in The Jesus Chronicles titled Marks Story. Taking the well known stories of Mark, 1 and 2 Peter, and historical accounts, the two authors add their own twists and plots to the story of the early Christians. Readers follow Mark from his first encounter of Jesus at the Upper Room to his final encounter with Peter, just before Peters execution. In the process, they learn about the last days of Jesus, as well as the earliest accounts of persecution against Christians.

As a young boy, Mark admires Peter and tries to glean any knowledge he can from the disciple. When his mother instructs him to carry a pitcher as a way of leading Jesus disciples to his home, Mark has no idea what will happen in the following days. Still harboring questions about Jesus authority and trustworthiness, Mark follows instructions. When Jesus and His disciples have the Last Supper at his home, however, Mark listens with wonder to Jesus words. What happens in that room lights a path for Mark that will lead to his growth as a person, Christian, and, ultimately, missionary. As he witnesses the crucifixion and the events following it, Mark realizes he cant deny the truth any longer, and his desire to follow in Christs footsteps takes him on a journey with famous apostles and missionaries of the Bible including Paul, Barnabas, and Peter. As Nero begins persecuting the Christians, however, will Mark be able to continue in the example of his elders, preaching Christ to his last breath?

Marks Story starts off slow with little to keep readers interest, but with perseverance like Marks, readers find the pace of the story increasing along with their interest. Any story about Christ should compel the reader. Unfortunately, LaHaye and Jenkins may lose readers in the first few pages before they have the chance to read the most compelling parts of Marks Story. Bestselling authors of the Left Behind series, LaHaye and Jenkins likely benefit from their previous success, but their Jesus Chronicles series lacks the power, description, and drama of Left Behind. They take more than half of Marks Story directly out of the Bible, and readers may feel they get more for their time and money with the Bible itself. Marks Story contains awkward dialogue and description that make the book more of a non-fiction account and less of a novel. The book has no style of its own, and, instead, takes after the Bible accounts. Even the Gospels each had their own emphasis and style.

Nevertheless, LaHaye and Jenkins do not completely fail their readers. Despite the slow pace and the drawn out length of their book, they stay true to the Gospels message: Jesus saves, and His message is worth dying for. As James 1:12 says, Blessed is the man who perseveres under trial, because when he has stood the test, he will receive the crown of life that God has promised to those who love him. In the end, readers will find Marks Story one worth reading if they only have the patience to get through the first half of it.  Harmony Wheeler, www.ChristianBookPreviews.com

▼▲
I'm the author/artist and I want to review Mark's Story: The Gospel According to Peter - eBook.
Back
×
Back
×