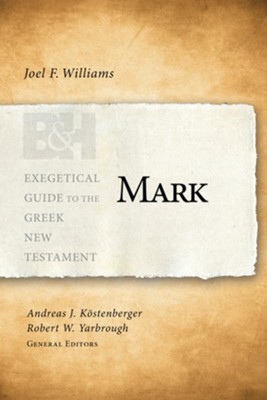 This volume is a groundbreaking resource that closes the gap between grammatical analysis, exegesis, and sermon preparation. Providing students, teachers, and pastors with the background for understanding the Greek text of Mark's Gospel, Joel Williams begins his technical commentary with a brief introduction on authorship, date, occasion, and purpose. Also included are a list of recommended commentaries, extensive exegetical notes, and more.

▼▲
The Exegetical Guide to the Greek New Testament (EGGNT) closes the gap between the Greek text and the available lexical and grammatical tools, providing all the necessary information for greater understanding of the text. The series makes interpreting any given New Testament book easier, especially for those who are hard pressed for time but want to preach or teach with accuracy and authority.

Each volume begins with a brief introduction to the particular New Testament book, a basic outline, and a list of recommended commentaries. The body is devoted to paragraph-by-paragraph exegesis of the Greek text and includes homiletical helps and suggestions for further study. A comprehensive exegetical outline of the New Testament book completes each EGGNT volume.

▼▲
"Joel Williams’s volume on Mark is a strong addition to the valuable EGGNT series started by Murray Harris. Providing expert analysis of grammatical features of the Greek text, it also contains well-informed insights about the narrative structure and major themes of the Gospel, suggestions about how to preach or teach individual portions, and excellent bibliographies of classic older works as well as quite recent publications worth pursuing for further study. Highly recommended for those with only a little Greek, as well as for those with more advanced knowledge who want seasoned guidance on the text and message of Mark."

"The most common complaint I hear from my intermediate-level Greek students is that none of the commentaries, even the technical ones, deal comprehensively with the syntactical functions of Greek—things like the function of a genitive, a participle or a particular Greek tense. Finally, the EGGNT series is answering this need with in-depth analysis and exegesis of Greek forms. Joel Williams’s commentary on Mark is a stellar addition to the series, a model of accuracy and clarity. This is an ideal textbook for exegetical courses on Mark’s Gospel and an invaluable tool for pastors teaching through the Gospel."

"Joel Williams’s commentary is a treasure trove for lay people, seminarians, and pastors who aim to study Mark in its original language but have mastered only the basics of Koine Greek. Williams supplies a thorough, accessible analysis of Mark’s vocabulary and grammar along with insightful commentary on significant text-critical problems and exegetical quandaries. As he skillfully leads his readers through the Gospel’s narrative structure, he highlights the growing conflict between the suffering Son of God and his fearful disciples. Especially helpful to preachers and teachers are Williams’s homiletical suggestions, intended to invite congregations into the heart of Mark’s teaching about Jesus’ identity and mission as well as the demands and rewards of following him."

"Williams’s years of labor in the Greek text of Mark shine in this volume. He brings his familiarity with the best scholarship to bear on his patient examination of Mark’s grammar and syntax. Alongside his judicious exegetical method, Williams offers numerous points of wise counsel for faithful exposition. There is no other work on the Greek text of Mark that equips readers to handle the second Gospel with such erudition and care."

"The EGGNT series is a great help to exegetes of the New Testament and to preachers seeking to be faithful proclaimers of the text of NT Scripture. With this volume on the Gospel of Mark, Joel Williams makes a contribution to the EGGNT series that is consistent with the purposes and format of the series. With proper attention to the secondary, scholarly literature on Mark, Williams seeks to attend primarily to the text of the Gospel of Mark as it has been laid it out by its Greek-speaking author. Bringing his years of experience in studying Mark and finding a faith-full confession in the Gospel’s intentionally constructed narrative, Williams seeks to exegete the Gospel with the same faith orientation. With important insights for properly preaching the Gospels—and avoiding all-too-common errors in expositing them—Williams will be a significant friend to those studying the text of the Gospel of Mark for the purpose of proclaiming its message."

"The EGGNT series provides valuable tools to students who have had several semesters of Greek but do not know how to apply that training in interpreting the Greek text.  In the commentary on Mark’s Gospel for this series, Joel Williams takes the reader through each verse of Mark and explains the grammatical issues in order to help the student better understand the text.  He is thorough in his analysis along with ample references and citations, each of which is valuable to a student set to exegete and study Mark’s Gospel.  In addition, the Introduction—with its explanation of the author, the characteristics of Mark’s Greek, the structure of the book, and principles for faithful exposition of Mark’s Gospel—is valuable.  In summary, this is a useful tool for students and teachers who are committed to studying God’s Word in the Greek text."

▼▲
I'm the author/artist and I want to review Mark: Exegetical Guide to the Greek New Testament.
Back
Back