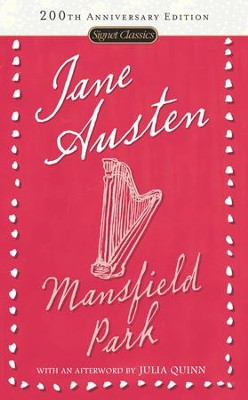 ▼▲
Jane Austen turns her unerring eye on the concerns of English society at a time of great upheaval in this historical romance classic.

Mansfield Park is named for the magnificent, idyllic estate that is home to the wealthy Bertram family and that serves as a powerful symbol of English tradition and stability. The novel’s heroine, Fanny Price—a "poor relation" living with the Bertrams—is acutely conscious of her inferior status and yet she dares to love their son Edmund—from afar. With five marriageable young people on the premises, the peace at Mansfield cannot last. Courtships, entertainments, and intrigues throw the place into turmoil, and Fanny finds herself unwillingly competing with a dazzlingly witty and lovely rival. As Margaret Drabble points out in her incisive Introduction, the house becomes "full of the energies of discord—sibling rivalry, greed, ambition, illicit sexual passion, and vanity," and the novel grows ever more engrossing right up to Mansfield’s final scandal and the satisfying conclusion. Unique in its moral design and its brilliant interplay of the forces of tradition and change, Mansfield Park was the first novel of Jane Austen’s maturity.

▼▲
Jane Austen (1775–1817) was born in Hampshire, England, to George Austen, a rector, and his wife, Cassandra. Like many girls of her day, she was educated at home, where she began her literary career by writing parodies and skits for the amusement of her large family. Although Austen did not marry, she did have several suitors and once accepted a marriage proposal, but only for an evening. Although Austen never lived apart from her family, her work shows a worldly and wise sensibility. Her novels include Sense and Sensibility (1811), Pride and Prejudice (1813), Mansfield Park (1814), Emma (1815), and Northanger Abbey and Persuasion, published together posthumously in 1818.

Margaret Drabble is the highly acclaimed novelist, biographer, and editor of The Oxford Companion to English Literature. Her novels include The Gates of Ivory, The Seven Sisters, and The Red Queen. She lives in London.

Julia Quinn is the New York Times bestselling author of eighteen historical romance novels, all of which take place in early-nineteenth-century Great Britain. She is the recipient of the RITA Award, romance’s highest honor, and is a graduate of Harvard and Radcliffe Colleges.

▼▲
“Never did any novelist make more use of an impeccable sense of human values.”—Virginia Woolf

▼▲
I'm the author/artist and I want to review Mansfield Park (200th Anniversary Edition) - eBook.
Back
×
Back
×