The Art of Man-Fishing: How to reach the lost
By: Thomas Boston 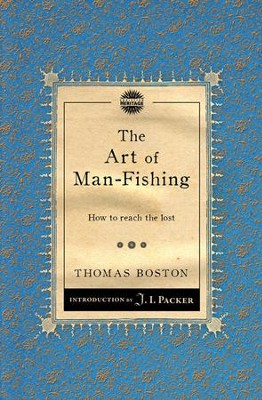 The Art of Man-Fishing: How to reach the lost

▼▲
The Art of Man-Fishing presents a clear and vigorous challenge to preachers and laymen to remain persistent in sharing the gospel with unsaved people. The book is divided in two parts--The Promise of Duty, and How May I Come by This Art?

A clear and vigorous challenge to preachers and laymen to remain persistent in sharing the gospel with unsaved people. The book is split in two parts:
1. The promise of duty. How does Christ make men 'fishers of men'? Why are unconverted men compared to fish under water? In what ways are ministers fishers by office?
2. How may I come by this art? What following Christ supposes and implies? In which way is Christ to be followed?
This is a classic explanation of the Puritan approach to evangelism that is also an encouragement for anyone explaining the gospel to someone else.

▼▲
Thomas Boston held a pastorate with a very small Congregation in Simprin, Scotland until 1707. He was an extremely popular preacher, though self-effacing - considering that he had but "small talents." He was reluctant to publish his works, although he wrote out completely all of his sermons before they were preached. Many, however, came to be published after his death at the age of 57.

"The 'scribble,' [as Boston called it] was published in 1773. Since then it has been hailed by evangelicals as a masterpiece on ministry... The idea of a beginning preacher of 22 producing a spiritual masterpiece is startling, no doubt, but Boston was an unusual man."

▼▲
I'm the author/artist and I want to review The Art of Man-Fishing: How to reach the lost.
Back
×
Back
×