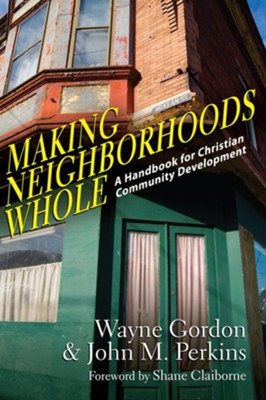 ▼▲
With decades of experience speaking prophetically and redemptively into the charged racial climate of the American South, John Perkins began to see a need for organized thinking and collaborative imagination about how the church engages urban ministry. Together with Wayne Gordon and a now legendary cadre of collaborators, the Christian Community Development Association (CCDA) was born.

Nearly thirty years later the CCDA's eight key components of community development still set the bar for how churches, parachurches and nonprofits engage cities with the whole gospel.With firsthand perspectives from leaders of longstanding and emerging community development ministries from throughout the world, Perkins and Gordon revisist eight communities and guide a new generation of disciples to seek the welfare of their cities to the glory of God.

▼▲
Already with decades of experience speaking prophetically into the charged racial climate of the American south, John Perkins began to see a need for organized thinking and collaborative imagination about how the church engages urban ministry. And so the Christian Community Development Association (CCDA) was born, with Wayne Gordon an immediate and enthusiastic participant. Nearly thirty years later CCDA’s eight key components of community development still set the bar for how churches, parachurches and nonprofits engage cities with the whole gospel. In Making Neighborhoods Whole Perkins and Gordon revisit these eight commitments and how they've played out in real communities, even as they scan the horizon of urban ministry to set a new tone. With profiles of longstanding and emerging community development ministries, they guide a new conversation and empower disciples of Jesus to seek the welfare of their cities to the glory of God.

▼▲
Wayne Gordon (D.Min., Eastern Baptist Theological Seminary) is founding pastor of Lawndale Community Church and chairman/president of the Christian Community Development Association (CCDA). John Perkins, the son of a sharecropper, grew up in Mississippi amid dire poverty and rampant racism. Though he had fled to California after his older brother was murdered by a town marshal, he returned after his conversion to Christ in 1960 to share the gospel with his community. His leadership of civil rights demonstrations earned him repeated harassment, beatings and imprisonment. However, in recent years Perkins has received recognition for his work with seven honorary doctorates from Wheaton College, Gordon College, Huntington College, Geneva College, Spring Arbor College, North Park College and Belhaven College. He continues to speak and teach around the world on issues of racial reconciliation, leadership and community development. Perkins is the founder of Voice of Calvary Ministries in Mendenhall, Mississippi, Harambee Ministries in Pasadena, California, and the Christian Community Development Association. His books include and Shane Claiborne is a preacher, writer and lover of Jesus. He attended Eastern University, where he studied sociology and youth ministry. Claiborne is cofounder of The Simple Way and is currently a part of The Alternative Seminary in Philadelphia, Pennsylvania. He serves on the board of the Christian Community Development Association. He is the author of and coauthor of Catch up with him at thesimpleway.org.

▼▲
"For nearly thirty years the Christian Community Development Association has been a resource for people seeking to do prophetic, nonpaternalistic urban ministry. In Making Neighborhoods Whole: A Handbook for Christian Community Development, CCDA cofounders Wayne Gordon and John Perkins, and other veteran and emerging leaders, revisit key principles and lessons learned."
"No one understands better how to transform neglected communities than John Perkins and Wayne Gordon. They and the cadre of frontline practitioners that has joined them in writing this concise and practical book represent fresh and effective methodology on the fundamentals of contemporary community development."
"Perkins and Gordon lay out the keys to successfully engaging cities with the Gospel. They give examples of how certain core principles have helped empower communities and how they can transform churches' urban ministries."
" Making Neighborhoods Whole draws on the experiences of numerous practitioners from around the country and globe. These folks, most serving at grassroots levels, have contributed stories that offer fleshed-out examples of the CCD philosophy, bringing the book to life and providing real-world illustrations of concepts that might otherwise seem unattainable. The book is a good guide for ministry development."
"This book is a refreshing read for those already practicing community development principles in their ministry. . . . I think Christian community development is necessary beyond urban places and this book sheds light on how it is possible to develop communities in all places."

▼▲
I'm the author/artist and I want to review Making Neighborhoods Whole: A Handbook for Christian Community Development - eBook.
Back
×
Back
×