Skip to main content
BIBLE SALE OF THE SEASON: For a Limited Time ~ Save on over 1,100 Bibles!
Making Crosses: A Creative Connection to God - eBook
By: Ellen Prewitt
Stock No: WW41554EB 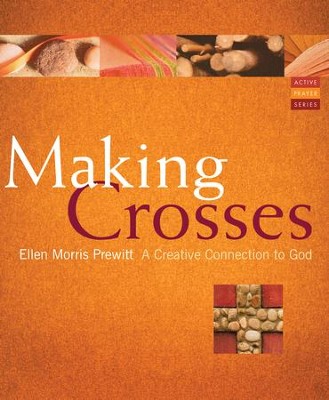 ▼▲
Discover a new creative way to pray. You don't need any artistic training to make a cross. All you need is a few found objects and a longing to draw closer to God. In Making Crosses Ellen Prewitt shares what she has learned from making crosses and how it can teach you deep spiritual truths as you meditate on Christ and His love.

▼▲
A new, creative, and active way to pray… Ellen Prewitt invites you to discover how this new spiritual practice—making crosses—can deepen a life lived for Christ. As she says, "To make a cross is to pray in a new way, but it's not as simple as old-fashioned petitionary prayer; making crosses is a way for God to pray through you." The practice of making a cross takes you beyond analytic thinking, and offers a way of prayer where understanding comes from doing. Working with the most complex symbol of Christianity—the cross—the pray-er learns to co-create with God in concrete and tangible ways, and discover the meaning of faith. Ellen Morris Prewitt is an award-winning writer who turned to making crosses after the tragedy of 9/11. Her writings have appeared in journals such as Image, River Teeth, and The Rambler. She lives in Memphis, Tennessee where, in addition to making crosses, she facilitates a writing group of men and women who live on the streets. Cross Making in the Life of the Church "Cross making offers individual exploration of spirituality wrapped in community." Worship: Cross making during a worship service based on the movement of the Holy Spirit Spiritual Work of the Church: - Discernment Committee: To bond the committee and help in the discernment process for candidacy for the priesthood - "Festival of the Cross" featuring all types of hand-made crosses, including found object Creation Crosses Outreach: - Children's crosses displayed and sold, with money sent to congregation's mission work - Neighborhood clean-up project with found objects used to make crosses - Inter-congregation crosses made by two downtown churches - Cross making session at local homeless shelter Themed Explorations: - Holy Week crosses created in group weekend before Holy Week and used in prayer/added to throughout the upcoming week - Pentecost "Spirit Cross" created during Fellowship Hour in summer months with heavy participation by all members of the church - Earth Day crosses in children's Sunday School class - "Coming to the Cross as a Child" during women's retreat - Lenten Crosses created at weekly gatherings of small groups Bonding: - During Sunday School where children and supervising parents make crosses together - Display of crosses created by congregants encourages discussion of faith and spirituality and further introduces congregants to each other - Group cross created during women's retreat, then placed in chapel to commemorate time with God and each other - Silent retreat cross making

▼▲
Ellen Morris Prewitt is an award-winning writer who turned to making crosses after the tragedy of 9/11. Her writings have appeared in Image, River Teeth, The Rambler, and elsewhere. She was the Peter Taylor Fellow in nonfiction at Kenyon College’s Summer Writing Program and her commentaries aired on the local NPR affiliate for many years. She lives in Memphis, Tennessee where, in addition to making crosses, she facilitates a writing group of men and women who live on the streets.

▼▲
I'm the author/artist and I want to review Making Crosses: A Creative Connection to God - eBook.
Back
Back