Skip to main content
NEW CYBER DEALS Save up to 90% thru 12/12  shop now >
Making Children Mind without Losing Yours, revised edition
By: Dr. Kevin Leman
Stock No: WW728334 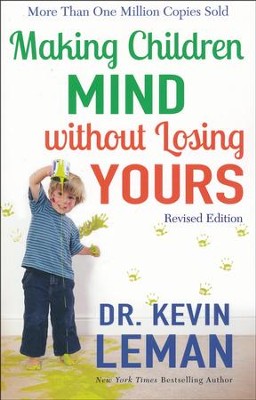 Want respectful, well-behaved kids who make good choices now and in the long haul? Making Children Mind without Losing Yours, now revised for a new generation of parents and kids, is a simple game plan any parent can follow. At the end of each chapter are questions for you to thoughtfully consider.

If anyone understands why children behave the way they do, it's internationally known psychologist and New York Times bestselling author Dr. Kevin Leman. Using the 7 principles of reality discipline, this father of five and grandfather of four reveals a practical, action-oriented game plan to

Thought-provoking questions at the end of each chapter and Dr. Leman's real-life examples give readers sure-fire techniques for developing a loving, no-nonsense approach for rearing children. With over a million satisfied customers, parents can't go wrong with this classic, perennial bestseller.

▼▲
Dr. Kevin Leman is an internationally known psychologist, radio and television personality, speaker, and educator who has taught and entertained audiences worldwide with his wit and commonsense psychology. The New York Times bestselling author of over fifty titles, including The Birth Order Book and Have a New Kid by Friday, has made thousands of house calls for radio and television programs, such as Fox & Friends, The Real Story, The View, Fox's The Morning Show, Today, Morning in America, CBS's The Early Show, The 700 Club, and CNN. A former contributing family psychologist to Good Morning America, Dr. Leman and his wife, Sande, live in Tucson, Arizona. They have five children and four grandchildren.

▼▲
I'm the author/artist and I want to review Making Children Mind without Losing Yours, revised edition.
Back
Back