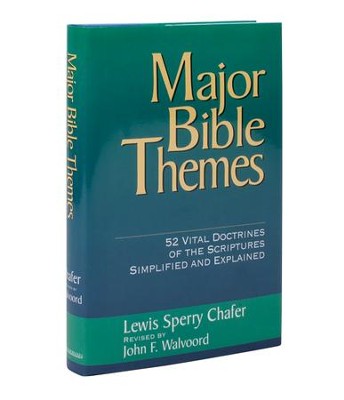 ▼▲
In this revised edition of Lewis Sperry Chafer's classic Major Bible Themes, John Walvoord has added some of the later writings of Chafer, as well as some of the mature conclusions from Chafer's lifelong study of the Bible. Several chapters have been combined, and several new ones have been added (75 percent of the material is new to this edition). Subjects omitted in the first edition are included, along with additional scripture passages. Designed for self-study, each chapter includes study questions, which can also be used in a group setting. Since there are fifty-two chapters, this book presents itself as a good year-long study of the Bible.

Major Bible themes was designed as a tool for spiritual growth, offering a valuable introduction into Christian doctrine. It sees the Bible as the inspired Word of God, focusing on its subject and purpose as a vehicle of divine revelation. The character and attributes of God are examined, with several chapters dedicated to each member of the Trinity. Other chapters look at topics like the dispensations, the covenants, Satan, sin, the church, the end times, and more.

For a basic introduction to Reformed (and dispensational) Christianity, there is no better book. All major doctrines, issues, and personalities are discussed in a simple, straightforward manner. Chapters are fairly short, and are designed to be used in conjunction with the study questions. Reading through Major Bible Themes in one year will greatly increase your knowledge of the Bible and the God revealed there.

In an age characterized by skepticism and ignorance of the Holy Scriptures, this timely volume clearly sets forth the biblical truths and teachings that long have been cherished by Christians. Virtually a classic for this century, Major Bible Themes includes chapters on doctrines that merit particular attention in the contemporary religious scene, such as the Holy Spirit, the nature of the Church, and the second coming of Christ. Designed for group and individual study, for pastors, laymen, and students, Major Bible Themes is an indispensable tool, providing the biblical basis for fifty-two doctrines, complete with topical and Scripture indexes. Questions for discussion and review follow each chapter. Whether your purpose is to explore Bible doctrines as a new Christian, to erase confusion stemming from conflicting views in the contemporary church, or to establish a stronger basis for witnessing to your beliefs, Major Bible Themes is essential for study and reference.

▼▲
I'm the author/artist and I want to review Major Bible Themes.
Back
Back