Skip to main content
God's Glory Alone--The Majestic Heart of Christian Faith and Life: What the Reformers Taught...and Why It Still Matters
By: David VanDrunen
Stock No: WW515803 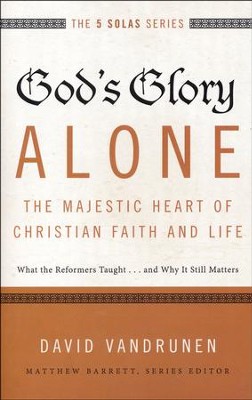 God's Glory Alone--The Majestic Heart of Christian Faith and Life: What the Reformers Taught...and Why It Still Matters

▼▲
Exploring the concept that all glory belongs to God alone, David VanDrunen looks at its development throughout the Reformation, in contemporary scholarship, and its origins in Scripture, beginning with the pillar of cloud and fire and culminating in Christ's second coming. In God's Glory Alone, he further reflects on how commitment to God's glory can fortify believers to overcome today's cultural temptations.

Renowned scholar David VanDrunen tracks the historical and biblical roots of the idea that all glory belongs exclusively to God. God's Glory Alone is a beautiful reflection on how commitment to God's glory alone fortifies us to live godly lives in this present age.

Reinvigorating one of the five great declarations of the Reformation—soli Deo gloria—VanDrunen:

This book leads you into a renewed sense of awe and adoration for our Creator and Redeemer as it mines deeply into the biblical and theological truths about God's glory that stand at the center of the Christian faith.

Historians and theologians have long recognized that at the heart of the sixteenth-century Protestant Reformation were five declarations, often referred to as the "solas." These five statements summarize much of what the Reformation was about, and they distinguish Protestantism from other expressions of the Christian faith: that they place ultimate and final authority in the Scriptures, acknowledge the work of Christ alone as sufficient for redemption, recognize that salvation is by grace alone through faith alone, and seek to do all things for God’s glory.

The Five Solas Series is more than a simple rehashing of these statements, but instead expounds upon the biblical reasoning behind them, leading to a more profound theological vision of our lives and callings as Christians and churches.

David VanDrunen (JD, Northwestern University School of Law; PhD Loyola University Chicago) is Robert B. Strimple Professor of Systematic Theology and Christian Ethics at Westminster Seminary California.  He is the author of Living in God’s Two Kingdoms: A Biblical Vision for Christianity and Culture and Divine Covenants and Moral Order: A Biblical Theology of Natural Law.

Matthew Barrett is associate professor of Christian theology at Midwestern Baptist Theological Seminary, the executive editor of Credo Magazine, and director of The Center for Classical Theology. He is the author of Simply Trinity; None Greater; Canon, Covenant and Christology; and God's Word Alone. He is currently writing a systematic theology.

▼▲
I'm the author/artist and I want to review God's Glory Alone--The Majestic Heart of Christian Faith and Life: What the Reformers Taught...and Why It Still Matters.
Back
Back