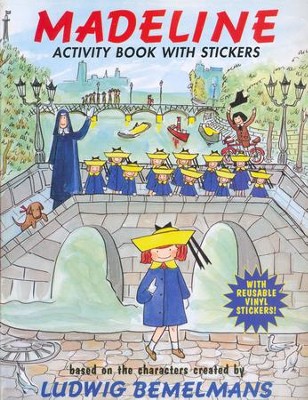 ▼▲
Read the classic story of Madeline then complete the fun activities. Includes mazes, stickers, word searches, pages to color, and so much more---all activities are based on Madeline and all of her friends. Answers are included in the back. Recommended for ages 3 years and older.

▼▲
It's playtime with Madeline!

This fun-filled collection of reusable stickers, simple puzzles, and pictures to color features Madeline, Pepito, and other beloved Ludwig Bemelmans characters as they frolic in scenic Paris. Gatefold flaps on the front and back covers unfold to reveal full-color, glossy spreads where young readers can creatively place their reusable vinyl stickers.

▼▲
Ludwig Bemelmans was a painter, illustrator, and writer of more than three dozen books for both adults and children. Born in 1898 in a part of Tirol now known as Merano, Italy, he came to the United States in 1914 and, after spending Christmas Eve on Ellis Island, set up residence in New York City. Before finding his voice as a writer, he worked in a hotel and ran his own restaurant. Later Bemelmans became a novelist and a nonfiction writer, as well as a frequent contributor to The New Yorker (for which he drew many covers), Town and Country, Holiday, and Vogue; and he also wrote a screenplay in Hollywood. He penned the first draft of Madeline on the backs of menus in Pete's Tavern. He is best known for his Madeline books, which rank among the most honored children's books ever. Madeline was named a Caldecott Honor Book; and the first of its five sequels, Madeline's Rescue, won the Caldecott Medal and was a New York Times Outstanding Book of the Year. A world traveler, Bemelmans was renowned as a true cosmopolite, an irreverent and droll chronicler of the incongruous, an elegant man-about-town, a merry observer of the improbable and the absurd. He died in 1962 after completing the sixth story about Madeline, Madeline's Christmas.

▼▲
I'm the author/artist and I want to review Madeline: The Magnificent Activity Book.
Back
×
Back
×