Skip to main content
BIBLE SALE OF THE SEASON: Save on over 2,100 Bibles thru 10/26. >
Lumberjacks and Ladies: 4 Historical Stories of Romance Among the Pines
By: Jennifer Lamont Leo, Naomi Musch, Candice Sue Patterson, Pegg Thomas
Stock No: WW091402 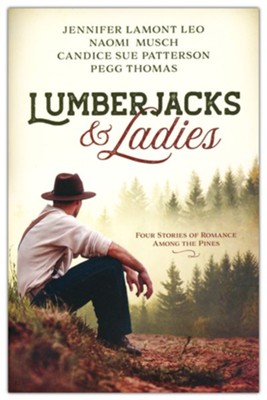 Lumberjacks and Ladies: 4 Historical Stories of Romance Among the Pines

▼▲
Lumberjacks and Ladies Work Together to Build America
Struggling to remain independent in the 1800s, four women reluctantly open up to help from lumberjacks—and love.

All That Glitters by Candice Sue Patterson
1851—Maine
Winifred finds herself running the family lobstering business when her father and brothers join the California gold rush. Will she stubbornly reject help from a local lumberjack?

Winter Roses by Pegg Thomas
1865—Michigan
Elizabeth cooks for a logging crew, spurning the men’s advances, until reoccurring gifts capture her attention. Will she heed her mother’s warning about "shanty boys"?

Not for Love by Naomi Much
1881—Wisconsin
Widowed, Maggie seeks a husband—in name only—from the logging camps, but the man who answers her letter is a surprise. Can she open her heart to love again?

Undercover Logger by Jennifer Lamont Leo
1890—Idaho
Carrie will not sell her timberland and allows the banker’s nephew to sign onto her logging crew to ferret out the reason she is losing money at an alarming rate. Will truth be revealed to her forlorn heart?

▼▲
Jennifer Lamont Leo has a passion for all things historical. She captures readers’ hearts through stories set in times gone by. Her first novel, You’re the Cream in My Coffee, won a Carol Award for Debut Novel from American Christian Fiction Writers as well as the reader-generated Grace Award for women’s fiction. Her other books include Ain’t Misbehavin’, Songbird and Other Stories, and a novella, "The Violinist," in The Highlanders collection. She hosts two podcasts: "A Sparkling Vintage Life" and "North Idaho Nuggets." She is also an editor, marketing content writer, and journalist. Originally from Illinois, she and her husband, Thomas, now work and play in the breathtaking mountains of northern Idaho. http://jenniferlamontleo.com
Naomi Musch is an award-winning author who writes from a deer farm in the pristine north woods of Wisconsin, where she and husband Jeff live as epically as God allows near the families of their five adult children. When not in the physical act of writing or spending time loving on her passel of grandchildren, she can be found plotting stories as she roams around the farm, snacks out of the garden, and relaxes in her vintage camper. Naomi is a member of the American Christian Fiction Writers, the Wisconsin Writers' Association, and the Lake Superior Writers. She loves engaging with others and can be found all around social media or at her site naomimusch.com
Candice Sue Patterson studied at the Institute of Children’s Literature and is an active member of American Christian Fiction Writers. She lives in Indiana with her husband and three sons in a restored farmhouse overtaken by books. When she’s not tending to her chickens, splitting wood, or decorating cakes, she’s working on a new story. Candice writes Modern Vintage Romance—where the past and present collide with faith. Her debut novel How to Charm a Beekeeper’s Heart was a 2012 ACFW First Impressions finalist and made INSPYs Longlist for 2016.
Pegg Thomas lives on a hobby farm in Northern Michigan with Michael, her husband of mumble years. A life-long history geek, she writes "History with a Touch of Humor." When not working on her latest novel, Pegg can be found in her garden, in her kitchen, with her sheep, at her spinning wheel, or on her trusty old horse, Trooper. See more at PeggThomas.com.

▼▲
I'm the author/artist and I want to review Lumberjacks and Ladies: 4 Historical Stories of Romance Among the Pines.
Back