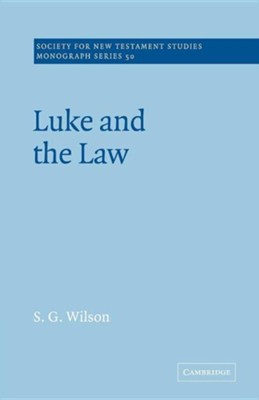 Luke and the Law, Paper

▼▲
The theme of law in Luke's Gospel has rarely been discussed, and then only tangentially in studies concerned with recovering Jesus' view of the law. The evidence of Acts has received considerably more attention, but almost always in the context of a comparison with Paul's view of the law or a reconstruction of the historical events which lie behind the narrative of Acts. A notable exception is J. Jervell's essay on 'The Law in Luke - Acts' in which he argues that Luke presents a consistent and conservative view of the law, viz. that the Church, as the renewed Israel, is committed to the law, Jewish-Christians being obliged to keep the whole of it and Gentile Christians those parts relevant to them. He thus disagrees with Conzelmann, who argues that the apostolic decree freed the Church once and for all from its previous obligation to the law.

▼▲
I'm the author/artist and I want to review Luke and the Law, Paper.
Back