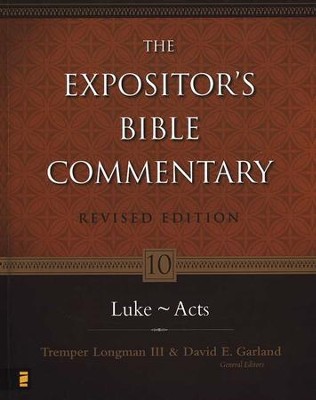 
Walter L. Liefeld is distinguished professor emeritus of New Testament at Trinity Evangelical Divinity School and is the author of Luke in the Expositor's Bible Commentary series.


David W. Pao (PhD Harvard University) is Professor of New Testament and Chair of the New Testament Department at Trinity Evangelical Divinity School. His publications include Acts and the Isaianic New Exodus, Thanksgiving: An Investigation of a Pauline Theme, Early Christian Voices: In Texts, Traditions, and Symbols (coeditor), Commentary on the Gospel of Luke, and After Imperialism: Christian Identity in China and the Global Evangelical Movement (coeditor).


Dr. Robert H. Mounce, president emeritus of Whitworth College, is the author of a number of well-known biblical commentaries, including the volume on Revelation in the NICNT. Dr. David Hubbard, former president of Fuller Theological Seminary, refers to him as "one of our generation's most able expositors." He was involved in the translation of the NIV, NLT, NIrV, and especially the ESV.


Richard N. Longenecker is Ramsey Armitage Professor of New Testament, Wycliffe College, University of Toronto. He receivec the B.A. and M.A. degrees from Wheaton College and Wheaton Graduate School of Theology, respectively, and the Ph.D. from New College, University of Edinburgh. His principal publications include Paul, Apostle of Liberty (1964), The Christology of Early Jewish Christianity (1970), The Ministry and Message of Paul (1971), Biblical Exegesis in the Apostolic Period (1975), “The Acts of the Apostles” in The Expositor’s Bible Commentary (1981), and The New Testament Social Ethics for Today (1984).

▼▲
I'm the author/artist and I want to review Luke-Acts, Revised: The Expositor's Bible Commentary.
Back
Back