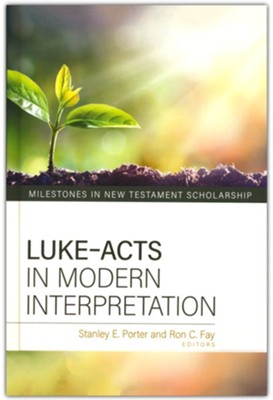 ▼▲
A biographical and interpretive history of Luke-Acts scholarship

Luke-Acts in Modern Interpretation explores the lives and work of ten interpreters who have significantly influenced the study of the Lukan writings over the past 150 years. The chapters contain short biographical sketches of the scholars that illuminate their personal and academic lives, summaries and evaluations of their major works, and analysis of the ongoing relevance of their work in contemporary scholarship on Luke-Acts.

An introduction and a conclusion by Stanley Porter and Ron Fay trace the development of Luke-Acts scholarship from the 1870s to the present and examine how these ten scholars' studies have shaped the field. Those invested in understanding the recent history of scholarship on Luke-Acts will find here a valuable deposit of historical insight into biblical studies.

▼▲
“This book is a handy guide to many of the most prominent and influential figures in critical Luke-Acts scholarship. For those wanting to get their feet wet in the world of Lukan studies, this is a great place to start.” -- F.M. and Ada Thompson Professor of Biblical Studies, Asbury Theological Seminary

“Luke-Acts represents the largest portion of the New Testament. It was long neglected but has been at the center of much New Testament discussion in recent times. This survey of major contributors provides a wonderful orientation to the issues that swirl around these two important parts of the New Testament. It prepares one well for engagement with the issues tied to these books.” -- Executive Director for Cultural Engagement, Howard G. Hendricks Center for Christian Leadership and Cultural Engagement; Senior Research Professor of New Testament Studies, Dallas Theological Seminary

“Luke-Acts in Modern Interpretation is an important collection of studies in the Milestones in New Testament Scholarship series. The two-volume work known as Luke-Acts warrants scholarly scrutiny not only because this work represents almost one quarter of the entire New Testament, but because it preserves a vital link between Jesus, his life, and ministry and the first generation of the church that emerged in the aftermath of his death and resurrection. Editors Stanley Porter and Ron Fay have assembled an impressive roster of contributors who have reviewed the history of scholarship concerned with Luke-Acts and have done so with critical judgment and keen insight.” -- John Bisagno Distinguished Professor of Christian Origins, Houston Baptist University

▼▲
I'm the author/artist and I want to review Luke-Acts in Modern InterpretationÃ.
Back
Back