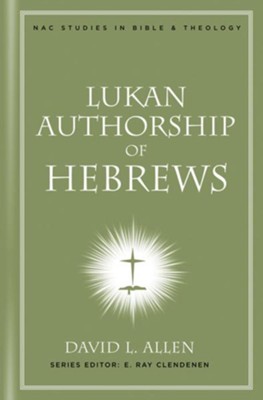 ▼▲
The authorial origins of the book of Hebrews has been a subject of much debate in the church since before the canon was finalized in the 4th Century. Oddly, if we accept the testimony of Clement of Rome, and understand his letter to the Corinthians as dated near the end of the first century, then we have historical testimony to Hebrews that predates the second century; or said differently, we have historical testimony to the book of Hebrews that dates right up to the end of the Apostolic era when the second generation of Christians was beginning to emerge.

Nevertheless, the information provided by Clement is no help in deterring who wrote the book, and perhaps it is best to side with Origen when he says, "who wrote the epistle, in truth, God knows". Of course, this has not stopped biblical scholars throughout the centuries from trying to figure out who in fact wrote the enigmatic and theologically loaded epistle.

The list of possible suspects for authorship include Paul, Clement of Rome, Barnabas, Apollos, Luke, Silas, Peter, Priscilla and Aquila (together), Aristion, Philip, Jude, Epaphras, John the Apostle, Timothy, and Mary, Mother of Jesus (assisted by Luke and John).

Proponents of the Lukan theory however, may be on the right track. There is much circumstantial evidence to support this theory, and in light of new ideas of Luke's ethnicity and advanced computer technology allowing us to more accurately track word usage, semantical choices, and other grammatical features the theory is receiving new life. In The Lukan Authorship of Hebrews David Allen presents the case for Lukan authorship in conjunction with the historical evidence and the new and fresh data that has emerged in recent years.

Providing a historical overview, and then proceeding into discussion regarding grammar, theology, as well as what he believes are mistakes about Luke's ethnic identity, Allen makes a compelling case that Hebrews is the original and independent work of Luke the physician and author of the third Gospel, and the book of Acts.

While fairly specialized, though not necessarily technical, this book will make an excellent read for students who need to learn how to grapple with evidence. It is obviously required reading for serious NT scholars.

▼▲
A new volume in the NEW AMERICAN COMMENTARY STUDIES IN BIBLE AND THEOLOGY series, Lukan Authorship of Hebrews explains why Luke is the likely author of the book of Hebrews. The ramifications of this possibility are then detailed in depth, including the way Hebrews informs the interpretation of the books of Luke and Acts. Also present throughout is commentary author David L. Allen’s thorough analysis of the writing style similarities between Hebrews, Luke, and Acts.

David Allen is dean of the School of Theology, professor of Preaching, and director of the Center of Biblical Preaching at Southwestern Baptist Theological Seminary in Fort Worth, Texas.

▼▲
I'm the author/artist and I want to review Lukan Authorship of Hebrews - eBook.
Back
×
Back
×