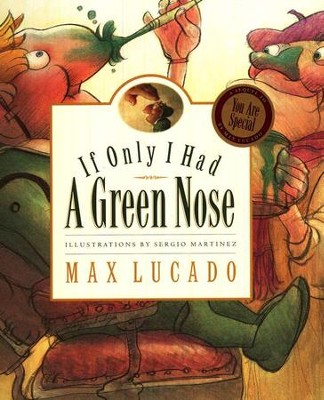 Max Lucado's Wemmicks: If I Only Had a Green Nose, Picture Book

▼▲
Just like Punchinello, we all want to fit in. To be accepted by the crowd. But at times that may mean we either have to look and act like others, or risk being rejected. Punchinello's hard-earned lesson shows us how important it is to be who we were created to be, and why that matters. So let this wonderful tale help you remember two things: that you were made unique for a reason, and that there is one who will always help you be you--wonderfully you. Recommended for ages 4 and up.

Author Max Lucado delivers an important message about our true identities through the story of Punchinello's struggle with the latest fad in Wemmicksville. Part of the Max Lucado's Wemmicks series.

▼▲
I'm the author/artist and I want to review Max Lucado's Wemmicks: If I Only Had a Green Nose, Picture Book.
Back
Back