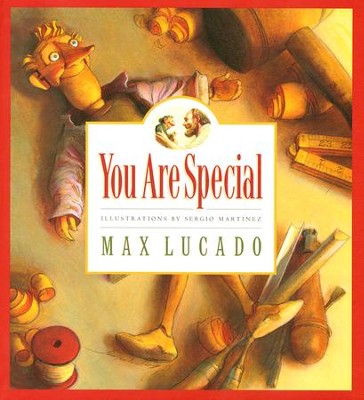 ▼▲
The world tells kids, "You're special if... if you have the brains, the looks, the talent." God tells them, "You're special just because. No qualifications necessary." Only one of those messages will find its place in their hearts. That's why every child you know needs to hear this one, reassuring truth: "You are precious in His sight." Max Lucado's delightful, fully illustrated children's tale from the pages of Tell Me the Secrets will help you say it again and again... with love. Recommended for ages 4 and up.

Follow the young Wemmick Punchinello as he discovers the source of his worth—his Creator. This beautifully illustrated tale communicates to children that God loves them regardless of how the world evaluates them. The first in Max Lucado’s Wemmicks series.

Q: what is a board book?

This is a hardcover edition of the book. For the board book (WW42195), the pages are made of heavy cardboard.

▼▲
I'm the author/artist and I want to review Max Lucado's Wemmicks: You Are Special, Picture Book.
Back
×
Back
×