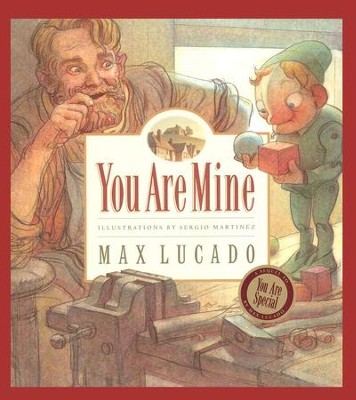 Max Lucado's Wemmicks: You Are Mine, Picture Book

▼▲
It's a new day in Wemmicksville for the enchanting wooden people, and there's a new problem for the little Wemmick named Punchinello. The Wemmicks compete with each other to collect the most--and the nicest--boxes and balls in order to appear more "important" than others, which means that, once again, there is havoc in the village. And one again, Punchinello is caught in the middle. But in the end, there's a message that kids need and parents will love: God's children are loved because He made them. They do not have to collect "things" to compete for status in His eyes. With the warm illustrations of artist Sergio Martinez, this new sequel to the phenomenal bestseller You Are Special is sure to become a classic in its own right. Recommended for ages 4 and up.

Follow Punchinello's foibles as he learns a lesson that children of every age must never forget: God's children are loved because of whose they are, not because of what they possess. Second in Max Lucado's Wemmick's series!

Karen Hill is a freelance writer and editor. She is the author of several children’s books, including My Faith Journal. Karen and her husband, Art, have three children and three grandchildren.

▼▲
I'm the author/artist and I want to review Max Lucado's Wemmicks: You Are Mine, Picture Book.
Back
Back