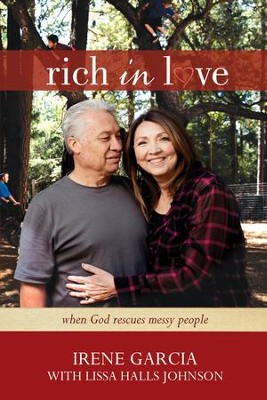 ▼▲
One Step of Obedience Led to Thousands
Irene and Domingo Garcia began their married lives at sixteen, already expecting a baby. Their first ten years together included Domingo’s alcoholism and abuse, and Irene’s desperate prayers for answers. Then a miracle happened: Domingo pleaded for forgiveness. As God healed their marriage, Irene and Domingo adopted a little girl. And a new season began for an imperfect couple who were willing to say yes to each other and to God.
Over the past forty-five years, the Garcias have birthed, fostered, or adopted thirty-two children. Their story holds difficult endings as well as promising new beginnings. Above all, their story reminds us what can happen when ordinary people submit to God’s call.
Rich in Love is about a family cemented in hope. About a need to love the orphan. And about a God who never, ever gives up.

▼▲
Irene Garcia and her husband have fostered or raised thirty-two children, many of whom have special needs. They worked in Special Ministries at Grace Community Church in Sun Valley, California and started the special needs ministry at Cornerstone Church in Simi Valley, California.
Lissa Halls Johnson is a best-selling author of nineteen books, including Still Growing with Kirk Cameron. She is the creator of the Brio Girls book series for teen girls.

▼▲
I'm the author/artist and I want to review Rich in Love: When God Rescues Messy People - eBook.
Back
×
Back
×