EARLY CHRISTMAS SALE: Shop over 900 items up to 85% off through 9/29 >
The Love Dare for Parents, LeatherTouch Edition
By: Stephen Kendrick, Alex Kendrick 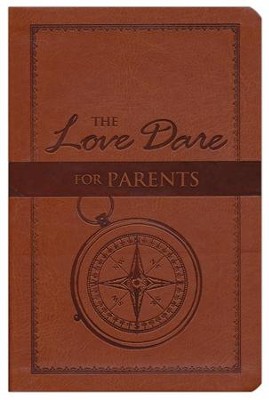 The Love Dare for Parents applies the same technique used in the popular marriage book, The Love Dare, to parenting, challenging parents to understand, practice, and communicate life-changing Christ-like love to their children. During each of the 40 day journey, parents are given a key verse from Scripture, a biblical principle about love that applies to parenting, and a specific challenge for the parent to do that is done for the sake of their child. You'll also find journaling space for your reflections and a FREE parenting assessment tool is available online. Deluxe Custom Edition.

▼▲
From the authors of international best-selling marriage book The Love Dare comes The Love Dare for Parents, a 40-day journey of "dares" challenging one or both parents to understand, practice, and communicate Christ-like love to their children.
Easy to read and work into a busy schedule, The Love Dare for Parents is designed to "turn the hearts of parents to their children and turn the hearts of children to their parents" (Malachi 4:6) so that moms and dads can more fully enjoy and delight in their children while maximizing the positive impact they have on their lives long term.
Each day brings a promising key verse from Scripture, a biblical principle about love that applies to parenting, a specific challenge the parent does for the sake of their child, and space to journal thoughts and reflect on what happened that day.
The Love Dare for Parents even includes access to a FREE online parenting assessment, helpfully keyed to select material in the book.
Parents, take the dare!

▼▲
Stephen Kendrick is an ordained minister who has served families for 20 years in student ministry and associate pastor positions. Along with his brother Alex, he is also a screenwriter (Facing the Giants, Fireproof, Courageous), movie producer, and coauthor of two New York Times best-selling books (The Love Dare, The Resolution for Men). Stephen and his wife, Jill, have six children.
Alex Kendrick is an ordained minister and New York Times best selling coauthor of The Love Dare and The Resolution for Men. He has spoken in numerous countries to students, families, and men's groups. He is also an accomplished actor, screenwriter, and film director, whose credits include Facing the Giants, Fireproof, and Courageous. He and his wife, Christina, have six children.

▼▲
I'm the author/artist and I want to review The Love Dare for Parents, LeatherTouch Edition.
Back
×
Back
×