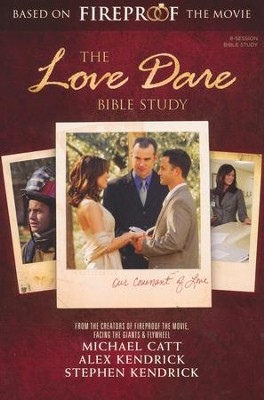 Could God use a movie to radically strengthen all the marriages in your church and throw a lifeline to those heading for divorce? Absolutely!

Couples are in crisis inside and outside the church. Now is the time for the body of Christ to rise up and communicate God's amazing design for marriage by combining cutting-edge media tools with timeless truths from the Word of God. The Love Dare group experience provides a powerful marriage enrichment opportunity unlike any other. These eight group sessions include thought-provoking questions; engaging clips from the Fireproof movie/robust Scripture studies, and lighthearted icebreakers that will enhance the experience and get the conversation rolling.

▼▲
Stephen Kendrick is an ordained minister who has served families for 20 years in student ministry and associate pastor positions. Along with his brother Alex, he is also a screenwriter (Facing the Giants, Fireproof, Courageous), movie producer, and coauthor of two New York Times best-selling books (The Love Dare, The Resolution for Men). Stephen and his wife, Jill, have six children.

Alex Kendrick is an ordained minister and New York Times best selling coauthor of The Love Dare and The Resolution for Men. He has spoken in numerous countries to students, families, and men's groups. He is also an accomplished actor, screenwriter, and film director, whose credits include Facing the Giants, Fireproof, and Courageous. He and his wife, Christina, have six children.

Michael Catt has served as senior pastor of Sherwood Baptist Church in Albany, Georgia, since 1989 and is executive producer of the popular films Flywheel, Facing the Giants, Fireproof, and Courageous that originated from the congregation. He also authored Fireproof Your Life and founded the ReFRESH revival conference. Michael and his wife, Terri, have two children.

▼▲
I'm the author/artist and I want to review The Love Dare Bible Study Member Book.
Back
×
Back
×