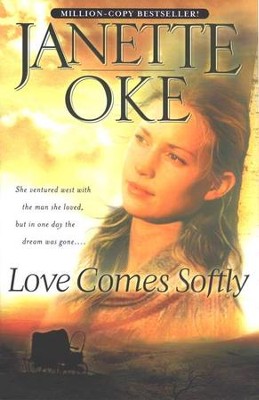 ▼▲
She ventured West with the man she loved, but in one day her world crumbled around her...First around in 1979, Love Come Softly has become a beloved classic with over one million copies sold. A generation of readers has laughed and wept and rejoiced with Marty and Clark Davis whose tragic circumstances threw them together on the frontier prairies of the 1800s.

▼▲
Love Comes Softly introduced the characters of Marty and Clark Davis, whose tragic circumstances brought them to a "marriage of convenience" on the frontier prairies during the mid 1800s. The story of how Clark's patient, caring love mirrored that of the heavenly Father, drawing Marty to faith and to love, has captured the hearts and imaginations of over one million readers on Book One alone!

Janette receives fan mail from all over the world and answers each letter personally. She received the 1992 President's Award from the Evangelical Christian Publishers Association for her significant contribution to Christian fiction, the 1999 CBA Life Impact Award and has been awarded the Gold Medallion Award for fiction.

Janette and her husband, Edward, have four grown children and enjoy their many grandchildren. They make their home in Canada.

▼▲
I'm the author/artist and I want to review Love Comes Softly.
Back
Back