Skip to main content
The Loss of the Ship Essex, Sunk by a Whale - eBook
By: Thomas Nickerson, Owen Chase
Stock No: WW46861EB 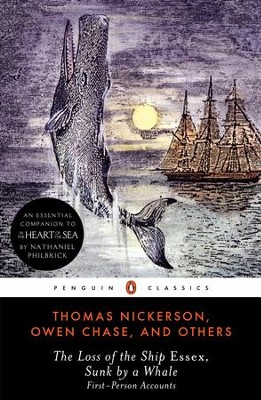 The Loss of the Ship Essex, Sunk by a Whale - eBook

▼▲
The gripping first-hand narrative of the whaling ship disaster that inspired Melville’s Moby-Dick and informed Nathaniel Philbrick’s monumental history, In the Heart of the Sea

In 1820, the Nantucket whaleship Essex was rammed by an angry sperm whale thousands of miles from home in the South Pacific. The Essex sank, leaving twenty crew members drifting in three small open boats for ninety days. Through drastic measures, eight men survived to reveal this astonishing tale. The Narrative of the Wreck of the Whaleship Essex, by Owen Chase, has long been the essential account of the Essex’s doomed voyage. But in 1980, a new account of the disaster was discovered, penned late in life by Thomas Nickerson, who had been the fifteen-year-old cabin boy of the ship. This discovery has vastly expanded and clarified the history of an event as grandiose in its time as the Titanic.

This edition presents Nickerson’s never-before-published chronicle alongside Chase’s version. Also included are the most important other contemporary accounts of the incident, Melville’s notes in his copy of the Chase narrative, and journal entries by Emerson and Thoreau.

▼▲
Thomas Philbrick is professor emeritus of English at the University of Pittsburgh.

Nathaniel Philbrick is a leading authority on the history of Nantucket Island. His In the Heart of the Sea won the National Book Award. His latest book is Sea of Glory, about the epic U.S. Exploring Expedition of 1838–1842. His other books include Away off Shore: Nantucket Island and Its People, 1602-1890 (which Russell Baker called "indispensable") and Abram's Eyes: The Native American Legend of Nantucket Island ("a classic of historical truthtelling," according to Stuart Frank, director of the Kendall Whaling Museum). He has written an introduction to a new edition of Joseph Hart's Miriam Coffin, or The Whale Fisherman, a Nantucket novel (first published in 1834) that Melville relied upon for information about the island when writing Moby Dick.

Philbrick, a champion sailboat racer, has also written extensively about sailing, including The Passionate Sailor (1987) and the forthcoming Second Wind: A Sunfish Sailor's Odyssey. He was editor in chief of the classic Yaahting: A Parody (1984).

In his role as director of the Egan Institute of Maritime Studies, Philbrick, who is also a research fellow at the Nantucket Historical Association, gives frequent talks about Nantucket and sailing. He has appeared on "NBC Today Weekend", A&E's "Biography" series, and National Public Radio and has served as a consultant for the movie "Moby Dick", shown on the USA Network. He received a bachelor of Arts from Brown University and a Master of Arts in American Literature from Duke. He lives on Natucket with his wife and two children.

▼▲
I'm the author/artist and I want to review The Loss of the Ship Essex, Sunk by a Whale - eBook.
Back
Back