Skip to main content
BIBLE SALE OF THE SEASON: Save on over 2,100 Bibles thru 10/26. >
Losing My Voice to Find It: How a Rockstar Went Silent and Discovered His Greatest Purpose
By: Mark Stuart, Roger W. Thompson
Stock No: WW0213290 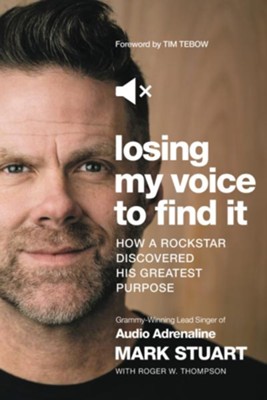 Losing My Voice to Find It: How a Rockstar Went Silent and Discovered His Greatest Purpose

▼▲
In the 1980s, Stuart was the frontman of the award-winning Christian rock group Audio Adrenaline. When he suffered a debilitating disease, he lost his voice, band, career, and marriage. But that's not the end of the story! Discover how he found a new calling---and reflect on how God might be leading you on a fresh path. 255 pages, hardcover from Nelson.

The incredible story of a lead singer's rise to fame and his crushing fall when he lost his singing voice, his career, and his marriage--and then found a new calling more in tune with God than he ever thought possible.

Mark Stuart was the front man of popular Christian rock band, Audio Adrenaline, at a time when the Christian music scene exploded. Advancing from garage band to global success, the group sold out stadiums all over the world, won Grammy Awards, and even celebrated an album going certified Gold. But after almost twenty years, Mark's voice began to give out. When doctors diagnosed him with a debilitating disease, the career with the band he'd founded and dedicated his life to building was gone. Then to his shock, his wife ended their marriage, and Mark believed he'd lost everything.

Unsure of his future, Mark traveled to Haiti to help with the band's ministry, the Hands and Feet Project. When the devastating 2010 earthquake hit, media learned he was present and sought him out for interviews. Ironically, Mark became the scratchy voice for the struggling Haitians, drawing the world's attention to their dire circumstances. In the process, Mark found a greater purpose than he'd ever known before. In this gripping, compelling new book, Mark Stuart overlays his story with passages from the gospel of John, urging his readers to listen for God's voice and to embrace his big love that calls us into a big life.

Mark Stuart, perhaps best known as the lead vocalist for the Christian rock band Audio Adrenaline, is a songwriter, singer, speaker, missionary, and advocate for vulnerable children in Haiti. Although he calls Franklin, Tennessee, home, he travels fulltime with his wife Aegis and their two children, Journey and Christela, in their family RV.

▼▲
I'm the author/artist and I want to review Losing My Voice to Find It: How a Rockstar Went Silent and Discovered His Greatest Purpose.
Back