Loren Cunningham: Into All the World Audiobook on CD
Narrated By: Tim Gregory
By: Janet Benge, Geoff Benge 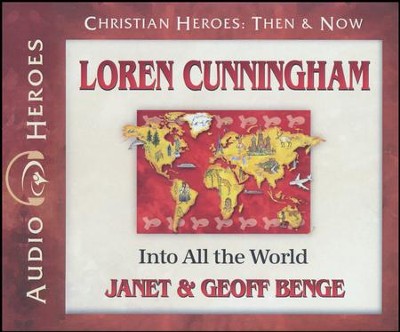 Loren Cunningham: Into All the World Audiobook on CD

Narrated By: Tim Gregory
By: Janet Benge, Geoff Benge
More in Christian Heroes Then & Now Series
Ywam Publishing / 2016 / Compact disc
Write a Review
Expected to ship on or about 08/05/20.
Email me when this product is available.
Stock No: WW589793

Ever since he was a young boy dreaming of writing "God Is Love" on the moon so that all the world's people could see it, Loren Cunningham has committed his life to reaching the whole world with the Good News of Jesus Christ, ministering in every nation on earth. Through his unswerving belief that nothing is impossible for God, Loren's vision of waves of young people became the reality of Youth with a Mission (YWAM), unleashing young Christians in missionary service when that was unheard of. Today, through the mission he began, multiplied thousands of believers-young and old-are working together to bring the gospel to the whole earth. For ages 10 and up.

▼▲
I'm the author/artist and I want to review Loren Cunningham: Into All the World Audiobook on CD.
Back
×
Back
×