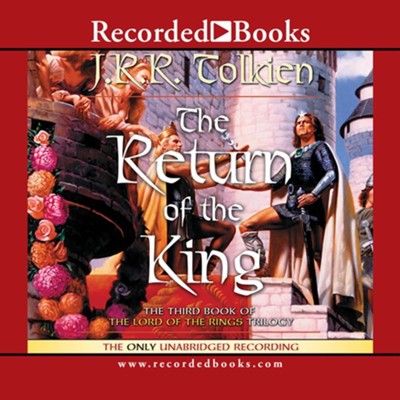 The Lord of the Rings: The Return of the King - Audiobook on CD

▼▲
The Return of the King is the towering climax to J.R.R. Tolkien's trilogy that tells the saga of the hobbits of Middle-earth and the great War of the Rings. In this concluding volume, Frodo and Sam make a terrible journey to the heart of the Land of the Shadow in a final reckoning with the power of Sauron. In addition to narrating the prose passages, Rob Inglis sings the trilogy's and poems a capella, using melodies composed by Inglis and Claudia Howard, the Recorded Books studio director. The 11th tape in this recording contains Tolkien's preface to the trilogy, including a prior history of the ring, and shire habitat, history, and folkways. Unabridged. Read by Rob Inglis. 15 hours. 16 CDs.

▼▲
As the War of the Rings builds in intensity and the dark minions of Sauron look to extend their evil influence over Middle-earth, Frodo and Sam edge ever closer to Mount Doom. Desperate to avoid the watchful eye of the Dark lord and the treacherous betrayal of Gollum, the two noble hobbits struggle through the Land of Shadow in an attempt to destroy the One Ring of Power and end Sauron's evil reign forever.

▼▲
I'm the author/artist and I want to review The Lord of the Rings: The Return of the King - Audiobook on CD.
Back