Shipment delay - click here for more details
The Ghost Map: The Story of London's Most Terrifying Epidemic-and How It Changed Science, Cities, and the Modern World - eBook
By: Steven Johnson 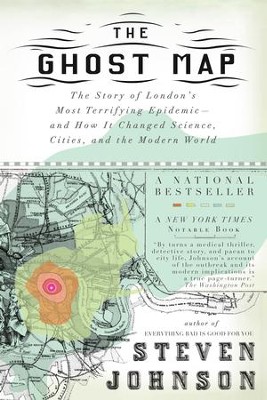 The Ghost Map: The Story of London's Most Terrifying Epidemic-and How It Changed Science, Cities, and the Modern World - eBook

▼▲
A National Bestseller, a New York Times Notable Book, and an Entertainment Weekly Best Book of the Year

"By turns a medical thriller, detective story, and paean to city life, Johnson's account of the outbreak and its modern implications is a true page-turner." —The Washington Post

It's the summer of 1854, and London is just emerging as one of the first modern cities in the world. But lacking the infrastructure-garbage removal, clean water, sewers-necessary to support its rapidly expanding population, the city has become the perfect breeding ground for a terrifying disease no one knows how to cure. As the cholera outbreak takes hold, a physician and a local curate are spurred to action-and ultimately solve the most pressing medical riddle of their time.

In a triumph of multidisciplinary thinking, Johnson illuminates the intertwined histories of the spread of disease, the rise of cities, and the nature of scientific inquiry, offering both a riveting history and a powerful explanation of how it has shaped the world we live in.

▼▲
Steven Johnson is the bestselling author of eleven books, including Where Good Ideas Come From, Wonderland, and The Ghost Map. He's the host and co-creator of the Emmy-winning PBS/BBC series How We Got To Now, and the host of the podcast American Innovations. He lives in Brooklyn and Marin County, California with his wife and three sons.

"By turns a medical thriller, detective story, and paean to city life, Johnson's account of the outbreak and its modern implications is a true page-turner." —The Washington Post

"Marvelous... as was Dava Sobel's Longitude. Yet The Ghost Map is a far more ambitious and compelling work... Mr. Johnson is never less than lively and beguiling." —The Wall Street Journal

"Steven Johnson tells the tale with verve, spicing his narrative with scenes of Dickensian squalor and the vibrant street life surrounding that squalor. But in Johnson's hands, The Ghost Map morphs into something more than mere history." —The San Diego Union-Tribune

"Steven Johnson gives us history at its best: colorful, connected and compelling. At the core is a medical mystery, or what today would be called an epidemiological detective story... A masterpiece of historical writing." —The Seattle Times

"This is more than a great detective story. It's the triumph of reason and evidence over superstition and theory, and Johnson tells it in loving detail." —Chicago Tribune

▼▲
I'm the author/artist and I want to review The Ghost Map: The Story of London's Most Terrifying Epidemic-and How It Changed Science, Cities, and the Modern World - eBook.
Back
×
Back
×