Are We Living in the End Times? - Updated & Expanded edition
By: Tim LaHaye, Jerry B. Jenkins 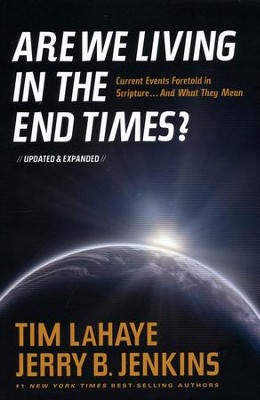 Are We Living in the End Times? - Updated & Expanded edition

▼▲
Our generation is the first to have the technology and the opportunity to fulfill many prophecies in Revelation. Will the Lord come soon? In this revised edition of their classic book, LaHaye and Jenkins offer an updated look at world events---and show why they believe the rapture and tribulation could occur in our era. 400 pages, softcover from Tyndale.

▼▲
In the updated and expanded edition of this classic title, noted scholar Dr. Tim LaHaye gives reasons for believing that the Rapture and the Tribulation could occur during our generation. Ours is the first generation that has the technology and opportunity to fulfill many of the prophecies of Revelation.
Understanding prophecy can be difficult and confusing. This book takes away all of the mystery—and the intimidation. It is user-friendly for the layperson, yet remarkably complete for the scholar.

▼▲
I'm the author/artist and I want to review Are We Living in the End Times? - Updated & Expanded edition.
Back
×
Back
×