Living the Braveheart Life: Finding the Courage to Follow Your Heart
By: Randall Wallace 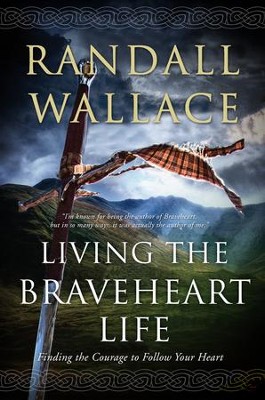 Living the Braveheart Life: Finding the Courage to Follow Your Heart

▼▲
Wallace is the Oscar-nominated creative force behind the critically acclaimed box-office hits Braveheart, Pearl Harbor, Secretariat, and Heaven Is for Real. Now in this inspiring memoir, you'll discover how the Holy Spirit gave him the courage to follow his dreams and helped him win on the greatest battlefield of all---the one inside the human heart. 224 pages, hardcover from Nelson.

"Every man dies. Not every man really lives."

More than twenty years ago Braveheart captured the hearts of moviegoers around the world. The film was nominated for ten Academy Awards, winning five. Now, for the first time, author and screenwriter Randall Wallace shares the journey that led him to the famous Scottish warrior and how telling the story of William Wallace changed the direction of his life and career—from that surprising first moment in Edinburgh, Scotland, to selling the script to a major Hollywood studio.

Part autobiography, part master class, Living the Braveheart Life invites us to explore five major archetypes in Braveheart that resonate not only in Randall’s life but in the modern-day lives of both men and women: the Father, Teacher, Warrior, Sage, and Outlaw.

Join blockbuster film director Randall Wallace on the journey of his creative and personal life. Discover why thousands of moviegoers continue to say Braveheart is their all-time favorite film and how its creator and architect came to believe that he must write as if his life depended on it.

Living the Braveheart Life is a challenge to all of us to engage in the greatest battle of all—the one inside the human heart.

"I don’t think I’ve ever read anything like it . . . a prescription for what ails the contemporary soul."

During his prolific Hollywood career, Randall Wallace has amassed an enviable body of work. Films such as The Man in the Iron Mask, We Were Soldiers, and Secretariat have become box office standards. Yet no film defines his life and career more than Braveheart, written from a well of deep personal passion, steeped in years of reflection.

With roots in small-town Tennessee, Randall’s hunger for adventure and unlimited horizons leads him to Duke University. &shy;There he sits under the tutelage of Thomas A. Langford, whose infectious love and learning and faith light up a classroom and a young man’s vision of life’s possibilities.

A decade later, while on a trip to Scotland, Randall is introduced to an unfamiliar statue with an inscription that bears his last name. After hearing the first fragments of the Scottish hero’s tale, Randall recognizes the seeds of a truly great story.

His William Wallace and his band of warriors forever changed the way we view love, war, and freedom. Living the Braveheart Life is a personal narrative of how an epic feature film came to life and breathed life into its author. It is the kind of book that will change the way we approach our internal battles, creative or personal.

Welcome to a master class in storytelling from the consummate storyteller.

Randall Wallace is a screenwriter, director, producer, novelist, and songwriter who rose to prominence through his original screenplay for the film BRAVEHEART. His work on the movie earned him an Oscar® nomination for Best Original Screenplay and a Writers Guild of America award for Best Screenplay Written Directly for the Screen. In addition to BRAVEHEART, he is the writer and/or director behind THE MAN IN THE IRON MASK, WE WERE SOLDIERS, PEARL HARBOR, SECRETARIAT, and HEAVEN IS FOR REAL, movies which celebrate the value of faith, courage, and honor.  He graduated from Duke University and put himself through a year of Divinity School by teaching karate.  In addition to his work as a filmmaker, he has authored nine books, is the founder of Hollywood for Habitat for Humanity, and is the father of three sons

▼▲
I'm the author/artist and I want to review Living the Braveheart Life: Finding the Courage to Follow Your Heart.
Back
×
Back
×