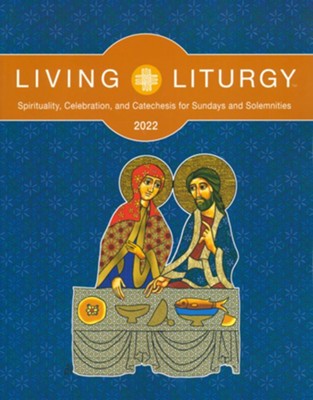 An entirely new resource prepared for each liturgical year, Living Liturgy™ gives your team the spiritual preparation they need to serve in their ministries, integrating daily living, prayer, and study in an inviting and easy-to-use format. Engaging art by Ruberval Monteiro da Silva, OSB, complements the text and invites further reflection on the Gospel of the day. This indispensable guide deepens a liturgical spirituality and strengthens the worship experience for the whole parish.

Stephanie DePrez is a Catholic writer and educator. She taught theology at Xavier College Preparatory High School in Palm Desert and Arrupe Jesuit High School in Denver, part of the Cristo-Rey network. While pursuing her master’s degree in music from UCLA, Stephanie served as the music director at St. Timothy Parish in West LA from 2015 to 2018. She holds a bachelor of arts in music and film production from the University of Notre Dame and recently completed two years as a United States teaching assistant with Fulbright Austria in Vienna. Stephanie is also an accomplished opera singer and has sung in Los Angeles, New York, and Berlin.

M. Roger Holland, II, is a teaching assistant professor in music and religion and director of The Spirituals Project at the Lamont School of Music, University of Denver. A graduate of Union Theological Seminary in New York City where he received a master of divinity degree, Roger also served as artist-in-residence and director of the Union Gospel Choir for over thirteen years. Roger serves as liturgical music consultant for the Archdiocese of New York’s Office of Black Ministry and music director for their special masses at St. Patrick’s Cathedral.

Verna Holyhead, SGS (1933–2011), Australian Sister of the Good Samaritan of the Order of St. Benedict, wrote with an emphasis on biblical scholarship, liturgical insight, and pastoral challenge. She is the author of the three-volume collection Welcoming the Word in Year A, B, and C, published by Liturgical Press.

Orin E. Johnson has been director of music ministries at Sts. Joachim and Ann Parish in St. Charles, Missouri, since 2012. There, he directs a children’s choir, a contemporary ensemble, a funeral choir, and a team of cantors, and supervises two other choirs and liturgical ministries at a K–8 parochial school. He was also coordinator of music and liturgy at the National Shrine of Our Lady of the Snows in Belleville, Illinois, from 1998 to 2012. He resides in St. Louis, Missouri, with his wife, Erin.
John T. Kyler serves as general editor for the parish market at Liturgical Press in Collegeville, Minnesota. In addition to having experience working in parish faith formation and high school and collegiate campus ministry, John is an active liturgical musician, composer, author, and speaker, focusing on the intersection of liturgy, justice, and healthy vulnerability in pastoral ministry. An instructor in the Emmaus Institute for Ministry Formation, John holds a master of education from the University of Notre Dame and a master of theological studies from Saint John’s University.

Ferdinand Okorie is a Catholic priest with the Claretian Missionaries, an assistant professor of New Testament and early Christianity, and the director of Bible Study and Travel Programs at Catholic Theological Union, Chicago. Also, he is the editor-in-chief at U.S. Catholic. He writes pastoral reflections on various New Testament topics, notably on theological and pastoral issues in U.S. Catholic and peer-review journals. He is the author of Favor and Gratitude: Reading Galatians in Its Greco-Roman Context (Fortress Academic, 2020).

▼▲
I'm the author/artist and I want to review Living Liturgy: Spirituality, Celebration, and Catechesis for Sundays and Solemnities Year C (2022).
Back
Back