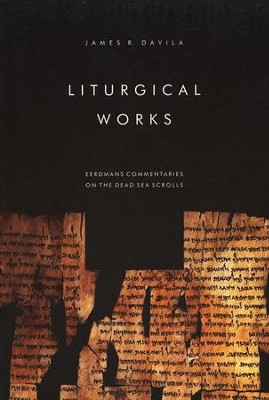 ▼▲
Among the manuscripts of the Dead Sea Scrolls are numerousfragments of liturgical texts: daily and festival prayers, songs and praises, and other fascinating documents. This inaugural volume in the Eerdmans Commentaries on the Dead Sea Scrolls series explores these important ancient texts, throwing new light on the ritual life of Jews at the turn of the common era. Beginning with a general introduction to the Qumran library and Jewish liturgical traditions, James Davila situates the liturgical texts found at Qumran in their historical context in translation of these Hewbrew texts and provides detailed line-by-line explanations of each document. Throughout his book Davila shows how the Qumran liturgical texts draw on and develop traditions from the Hebrew Bible, and he explores their significance as background to Jewish liturgy, Jewish mysticism, and Christian origins. This volume and the complete commentary project will become the standard reference work on the Dead Sea Scrolls.

▼▲
Among the invaluable manuscripts of the Dead Sea Scrolls are numerous fragments of liturgical texts pertaining to the ritual life of Jews living around the turn of the common era. These fascinating writings include prayers for annual festivals, a covenant renewal liturgy, a mystical liturgy for Sabbath sacrifices, a grace ceremony for mourners, daily and weekly prayers, liturgies of purification, and perhaps even a wedding ceremony. In this volume, the first to be published in the Eerdmans Commentaries on the Dead Sea Scrolls series, James Davila introduces, translates, and provides a detailed exegesis of these important documents.

The book begins with a general introduction to the Qumran library and Jewish liturgical traditions. Davila then provides an introduction, translation, notes on the original Hebrew, and line-by-line commentary for each of the Qumran liturgical works. Davila's excellent translation work combines overlapping fragmentary manuscripts into a single, smoothly flowing text, and his commentary includes numerous fresh insights and observations on these writings. Giving full attention to parallel texts found in the Hebrew Bible and other Jewish and Christian writings through late antiquity, Davila firmly situates the Qumran liturgical works in their historical context in Second Temple Judaism and discusses their significance as background to the Jewish liturgy, Jewish mysticism, and Christian origins.

Shedding light on a period of Jewish history whose ritual life formerly lay almost entirely in darkness, this volume makes--and subsequent ECDSS volumes will make--a valuable contribution to our understanding of the biblical world.

▼▲
Internationale Zeitschriftenshau for Bibelwissenshaft und Grenzgebiete
"Davila, one of the leading international experts on the Dead Sea Scrolls, translates and in part reconstructs the very fragmentary corpus of texts that specialists have decided to classify as 'liturgical'. . . The distinctive feature of the present volume is the detailed, line-by-line commentary which summarizes, supplements, and frequently corrects earlier research. Davila has set a high standard for the series of which the present book happens to be the first installment."

Religious Studies Review
"The great strength of the work is found in the commentary section, where Davila provides extensive references to biblical, Rabbinic, Christian and Hekhalot literature. It is a significant resource for scholars and students interested in understanding the Qumran liturgical texts in their historical and literary context. "

▼▲
I'm the author/artist and I want to review Liturgical Works.
Back
×
Back
×