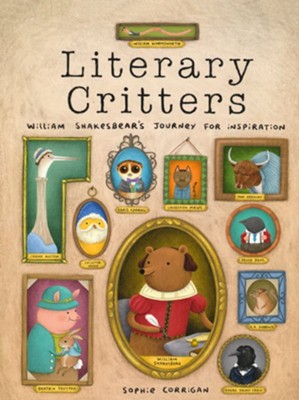 Literary Critters is a truly unique picture book, introducing young readers to classic literary figures and encouraging them to use their imaginations. This playful story promotes literacy and storytelling as quirky playwright William Shakesbear sets off on a journey to visit some of his Literary Critter friends to see if they have any writing ideas to share—including friends like Mole Dahl, Crane Austen, Beatrix Trotter, Edgar Talon Crow, Yak Kerouac, C.S. Shrewis, Langston Mews, and more.

As Will visits his fellow Literary Critter Guild members, he’s greeted with lots of advice from his author friends and has some adventures along the way. He also invites young readers to become part of the Literary Critters Guild and continue growing in their love for all things reading, writing, and books.

Literary Critters is a truly unique picture book, introducing young readers to classic literary figures and encouraging them to use their imaginations. As William Shakesbear visits his fellow Literary Critter Guild members, he’s greeted with lots of advice from his author friends and has some adventures along the way.

This playful story promotes literacy and storytelling as quirky playwright William Shakesbear sets off to find some inspiration for his new play. Along the way, Will asks his Literary Critter friends about what inspires them to write—including Mole Dahl, Crane Austen, Beatrix Trotter, Edgar Talon Crow, Yak Kerouac, C.S. Shrewis, Langston Mews, and more. He also invites young readers to become part of the Literary Critters Guild and continue growing in their love for all things reading, writing, and books.

If your child loves Literary Critters, check out these other titles by Sophie Corrigan:

Sophie Corrigan is a freelance illustrator and author from Lancashire, UK. She has illustrated many diverse items from books to calendars to T-shirts and more! When not illustrating and maintaining her online art shops, Sophie spends the spare time she has going to shows, watching nature programs, eating vegetarian food, hanging out with her pet cockatiels, and occasionally crafting cute things from wool and clay.

▼▲
'An attack of writer's block sends upset ursine William Shakesbear out to seek inspiration from some strangely familiar friends. Except for hirsute Yak Kerouac ('No time to talk, Will! I'm on my way to EVERYWHERE!'), every animal tries to help--from Mole Dahl, who suggests that 'a little magic can take you a long way,' to C.S. Shrewish, who finds inspiration even in a box of Turkish delight. Beatrix Trotter snorts that there's 'something delicious about writing the first words of a story.' Edgar Talon Crow advises him to seek it 'in the shadows.' 'Hold fast to your dreams, Will!' purrs Langston Mews, sprawled out beside a (doubtless) deep river. Big-eyed Loris Carroll invites him to a tea party with fluttery Flyer Angelou and rotund T.S. Elephant. The puns don't stop there, but the bearish bard's imagination remains unfired until at last he lumbers back to his den to hibernate and 'perchance to dream.' And indeed, the following spring he wakes up with an idea for a play (tentatively?) titled 'A Winter-Long Dream' and closes with a letter to readers asking what they will be reading or writing next. In her cartoon illustrations, Corrigan sandwiches sweet views of friendly critters in appropriate period dress between a blank membership certificate in the Literary Critters Guild at the beginning and a closing portrait gallery of the authors on whom the characters were based. The play (on words) is definitely the thing! (Picture book. 7-9)' -- Kirkus Reviews

'This charming tribute to famous authors - referenced with equally charming name puns - centers on William Shakesbear who is on a quest to find a new writing topic. Decked out in an Elizabethan ruff (neck collar) and fancy top, Shakesbear meanders through the countryside to visit various members of his Literary Critters Guild. Shakesbear's attire along with his quill and ink writing materials gently cue readers about the norms of his era. This artistic messaging told in appealing, semi-primitive, full-color drawings continues through each stop Shakesbear makes. All exchanges include cleverly inserted real-life author quotes from Critters such as Crane Austen, Beatrix Trotter, a pig in a cardigan; Yak Kerouac who's packed for travel; Edgar Talon Crow in his shadowy treehouse; and C.S. Shrewis with his wardrobe of fantastical ideas. Loris Carroll, Charles Chickens, Oscar Wild (a fox), George Claw-well (a cat), T. S. Elephant, the Prawnte Sisters, Flyer Angelou (a butterfly), William Wormsworth, Wagatha Christie (a dog), Langston Mews (a cat), and Chiktor Hugo (a tiny bird) all make appearances, too. Each exchange features art, quotes, and puns that reference the real-life author's best-known stories. By day's end, Shakesbear is replete with ideas and exhausted. He dreams deeply and wildly through a long hibernation and awakes ready to write his own play. The front and back matter feature full-page letters from Shakesbear to new members of the Literary Guild - the readers. These letters bookend the plot as well as urge readers to become writers. And while the letters' puns are not nearly as clever as those in the story, the sentiment behind the invitation is sincere.' -- Childrens Literature

▼▲
I'm the author/artist and I want to review Literary Critters: William Shakesbear's Journey for Inspiration.
Back
Back