EARLY CHRISTMAS SALE: Shop over 900 items up to 85% off through 9/29 >
Lincoln's Greatest Speech: The Second Inaugural - eBook
By: Roland White Jr. 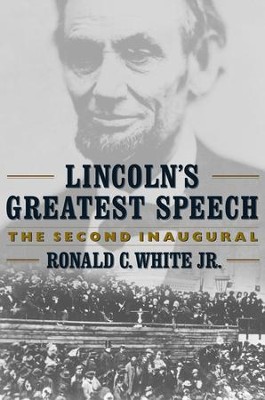 ▼▲
After four years of unspeakable horror and sacrifice on both sides, the Civil War was about to end. On March 4, 1865, at his Second Inaugural, President Lincoln did not offer the North the victory speech it yearned for, nor did he blame the South solely for the sin of slavery. Calling the whole nation to account, Lincoln offered a moral framework for peace and reconciliation. The speech was greeted with indifference, misunderstanding, and hostility by many in the Union. But it was a great work, the victorious culmination of Lincoln's own lifelong struggle with the issue of slavery, and he well understood it to be his most profound speech. Eventually this "with malice toward none" address would be accepted and revered as one of the greatest in the nation's history.
In 703 words, delivered slowly, Lincoln transformed the meaning of the suffering brought about by the Civil War. He offered reunification, not revenge. Among those present were black soldiers and confederate deserters, ordinary citizens from all over, the black leader Frederick Douglass, the Cabinet, and other notables. John Wilkes Booth is visible in the crowd behind the president as he addresses posterity.
Ronald C. White's compelling description of Lincoln's articulation of the nation's struggle and of the suffering of all -- North, South, soldier, slave -- offers new insight into Lincoln's own hard-won victory over doubt, and his promise of redemption and hope. White demonstrates with authority and passion how these words, delivered only weeks before his assassination, were the culmination of Lincoln's moral and rhetorical genius.

▼▲
Ronald C. White Jr. is professor of American Intellectual and Religious History at San Francisco Theological Seminary, as well as the author and editor of five books. He lives in La Cañada, California.

▼▲
"In lucid prose, White explores each level and places the Second Inaugural in a broad historical and theological context." -- James M. Mcpherson
"Professor White's book on the preparation, delivery, and influences of Lincoln's Second Inaugural Address is a significant addition to Civil War literature." -- Shelby Foote, author of The Civil War: A Narrative
"[Lincoln's Greatest Speech] is going to have a wide impact on Lincoln scholarship." -- David Herbert Donald, author of Lincoln

▼▲
I'm the author/artist and I want to review Lincoln's Greatest Speech: The Second Inaugural - eBook.
Back
×
Back
×