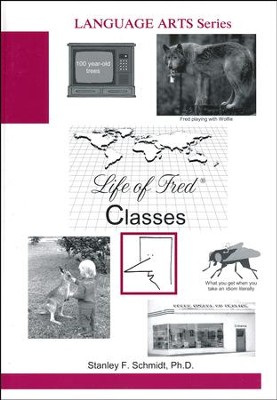 Sample Pages
Buy Item Our Price$24.00
5 out of 5 stars for Life of Fred: Classes (1 Review)
In Stock
Quantity:
Stock No: WW032150
Polka Dot Publishing / Hardcover
Quantity:
Add To Cart
of These in Your Cart

By: Stanley F. Schmidt Ph.D.
More in Life of Fred Series
Polka Dot Publishing / Hardcover
5 out of 5 stars for Life of Fred: Classes (1 Review) Write a Review
In Stock
Stock No: WW032150

For those unfamiliar with the series, the texts follow the life of Fred Gauss-a six-year-old math professor at Kittens University who was born on the slopes of the Siberian Mountains-who has many humorous, unlikely, and zany adventures. Informal in tone and approach, these books are designed to engage students in a fun narrative while also instilling a solid understanding of concepts without an abundance of repetitive drills!

Classes is the third book in the four-book series. Nineteen chapters are included. Each is designed to take one day and includes approximately four pages with a "Your Turn to Play" exercise set at the end (which consists of 3-4 questions). Answers are provided on the next page for students to go over themselves after attempting to solve the problems.

This book covers: he overall picture in business, math, football, life, and English, Seven parts of speech, Tense is the Latin word for time, Prepositions explained in 30 seconds, A sentence with 16 prepositional phrases, Adjectives, Three kinds of adjectival errors, Four uses of italics, Simplifying the 12 tenses, Positive, comparative, and superlative forms of adjectives, Proper nouns used as adjectives, Suffix, Using the present tense to indicate things that are always true, Direct and indirect objects, Often the least effective way to teach is to lecture, Nominative, objective, and possessive cases, Simile, Schwa, Auxiliary verbs, Elliptical construction, Formal, informal, nonstandard, and general English, Two ways our brains work, The four emotions (glad, sad, mad, and afraid), Counter words, The three reasons to write, Adverbs, The three parts of mothering, The seven rules for when to double the final consonant when adding the suffix -ed (and simplified down to one rule), Intersection of sets, Less vs. fewer, Infinitive form of a verb as subject, object, adjective, and adverb, Holloware, flatware, and how to set a table, Prepositions at the end of sentences, Euphemisms and minced oaths, Subjunctive, imperative, and indicative moods, Antecedents of pronouns, Nauseous vs. nauseated, Stream of consciousness writing, Hyphens can change meaning, When to hyphenate compound adjectives (the six rules).

128 pages, indexed, hardcover with smyth-sewn binding. Answers are also included in the text and written directly to the student. Grades 9-12.

▼▲
I'm the author/artist and I want to review Life of Fred: Classes.
Back
Back