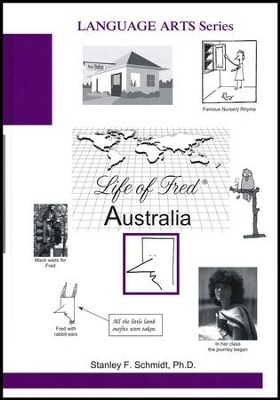 Sample Pages
Buy Item Our Price$24.00
3.5 out of 5 stars for Life of Fred: Australia (4 Reviews)
In Stock
Quantity:
Stock No: WW032128
Polka Dot Publishing / Hardcover
Quantity:
Add To Cart
of These in Your Cart

By: Stanley F. Schmidt Ph.D.
More in Life of Fred Series
Polka Dot Publishing / Hardcover
3.5 out of 5 stars for Life of Fred: Australia (4 Reviews) Write a Review
In Stock
Stock No: WW032128

Australia is the first book in the four-book series. Nineteen chapters are included. Each is designed to take one day and includes approximately four pages with a "Your Turn to Play" exercise set at the end (which consists of 3-4 questions). Answers are provided on the next page for students to go over themselves after attempting to solve the problems.

This book covers: Seven billion = 7,000,000,000, Indentation to begin paragraphs, Three punctuation marks to end a sentence, Punctuation began common usage around 1450 (with the invention of the printing press), Two to the third power, Subjunctive mood used much more frequently in German, French, and Latin than in English, Postscripts, Picoseconds, Six question words (who, when, where, why, what, and how), State abbreviations, Correct way to hold a pencil, Plurals of words (two cases), Irregular plurals, Finding your calling in life, Opening and closing salutations, Only the first word in a closing salutation is capitalized, Australia is between the Indian and the Pacific oceans, Silent letters, Islands vs. continents-the four questions to ask, Homonyms, Topology, Daniel Boone, Is noon a.m. or p.m.?, Proofreading, A bus with no door, Exaggerating vs. lying, Hyperbole, That vs. which, Land of Nod, Using commas in lists, Five- and fifteen-year-olds think about clothing differently, When to omit the s after the apostrophe when forming a possessive, When to ask questions, Magnetic north pole is moving, Pole reversals, Continual vs. continuous, Less vs. fewer, Heteronyms, Two past tenses of kneel and of dream, Verbs defined, Winter in June, How to have two summers and no winters each year, Prefixes, Stich and hemistich, Alliteration, International Date Line, Five ways to make plurals, Two uses of an apostrophe, Autobiography, Vowels, Six ways to make plurals, Two past tenses of sneak, A seventh and eighth way to make plurals, Which countries use the metric system.

128 pages, indexed, hardcover with smyth-sewn binding. Answers are also included in the text and written directly to the student. Grade 9, or advanced 8th grade students.

▼▲
I'm the author/artist and I want to review Life of Fred: Australia.
Back
Back