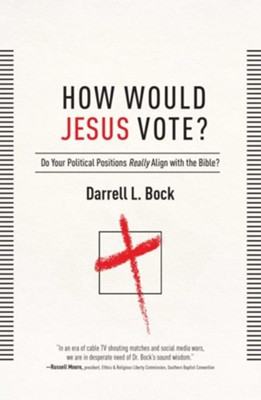 ▼▲
If Jesus were a voting man, living in twenty-first century America, on what side of our many political issues would he stand?

As we approach another election year, we hear politicians on both sides of the aisle as well as religious leaders of every stripe claim to know—with absolute certainty—where Jesus and Christianity stand on their favorite issues. Jesus, of course, would vote exactly as they do. He would most certainly stand where they stand and fight for and against what they do. End of discussion. But would he?

This book presents the values of Jesus and the Scripture in a way that challenges simple conclusions about complex issues. Examining some of the most contentious political topics of our time in light of Scripture and the teachings of Jesus, the end goal of this book is not to promote a particular point of view but to objectively portray what the Bible says on political and cultural topics. Author Darrell Bock intends to provoke a different kind of conversation—a conversation where differences are heard and respect is shared, a conversation where we can disagree passionately yet dialogue peacefully and well.

▼▲
Darrell L. Bock is Research Professor of New Testament Studies at Dallas Theological Seminary in Dallas, Texas. He also serves as Professor for Spiritual Development and Culture for the Seminary’s Center for Christian Leadership. He is the New York Times bestselling author of Breaking the Da Vinci Code. His special fields include the historical Jesus, gospel studies, and the integration of theology and culture. He is a graduate of the University of Texas (BA), Dallas Theological Seminary (ThM), and the University of Aberdeen (PhD).

▼▲
“Dr. Bock does not simply call us to think outside the box, but to think outside our bias."
"How Would Jesus Vote? is the blueprint for those who want to see serious change in this country, from politicians to those who influence them. This is an excellent work!”
"If you don’t know how Jesus would vote, you’ll want to read this book; if you think you do know how Jesus would vote, you definitely need to read this book!”
"This is a much-needed attempt to think ‘Christianly’ about the moral and political dilemmas of our day.”
"This is a must read for any of us who desire to be effective for Christ in an increasingly hostile environment.”
"I recommend this book for all who want to honor God in their whole lives, including their politics.”
"Dr. Bock challenges readers to engage vigorously but respectfully, keeping to the issues and avoiding personal attack. His call for a balance of conviction and compromise is one Christ-followers of every political persuasion would do well to heed."
"If you are looking for biblical thinking and sound reasoning to help you navigate changing times and politics, I highly recommend Dr. Darrell Bock as a trusted guide and biblical voice.”
"This book is wisdom for constructive Christian civil discourse in a rapidly changing social landscape.”
"Much of the discussion in Christian circles involves interpreting biblical texts through the eyes of political presuppositions rather than understanding the biblical text and applying it to the political dialogue. Dr. Bock’s book is a corrective to this method."

▼▲
I'm the author/artist and I want to review Life, Liberty, and Loving Your Neighbor - eBook.
Back
Back