Lie for Me
By: Karen Young 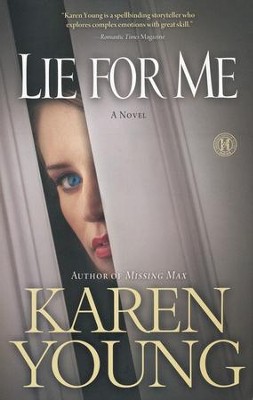 ▼▲
When Tucker's ex-wife is murdered, he's left without an alibi . . . so he turns to his ex-fiance Lauren for help. She refuses---and he disappears without a trace. Lauren never expects to see Tucker again. But will a chance encounter years later drag her back into the labyrinth of his life? 320 pages, softcover from Howard.

▼▲
Lauren Holloway's ex-fiance, Tucker Kane, is without an alibi when his ex-wife is murdered. Tucker claims to have been alone at a job site at the time, but he needs Lauren to lie for him so that he won't become a suspect in the murder. She refuses; now as a prime suspect, Tucker disappears without a trace. Years later, she sees him at an antique fair, and worried that Lauren will reveal his carefully constructed life, he forces his into her hotel room and tells her that he's trying to find evidence to clear his name. As Lauren tries to help Tucker, she questions her ability to judge character as she uncovers a labyrinth of deceit, putting her very life in danger.

"Karen Young has written an exciting thriller with the second chance romantic subplot enhancing the suspense. Readers will root for the embattled lead protagonists caught in the crosshairs of a ruthless diabolical killer. . . . Lie For Me is a gripping one sitting read."

▼▲
Karen Young is the international bestselling author of thirty-eight novels.
She has more than ten million books in print and is the recipient of the coveted RITA award from Romance Writers of America and the Career Achievement and Reviewer’s Choice awards from Romantic Times magazine. She is known as “a spellbinding storyteller who writes with sensitivity about issues facing contemporary women.” Karen's career in writing fiction for women has run the gamut from traditional romance to mystery thrillers to inspirational fiction. In her relationship-driven plots, she creates characters that could easily be her readers, and then places them in extraordinary circumstances while adding suspense to the mix.

▼▲
"This is a riveting and inspiring novel that will leave readers profoundly moved. The wrenching moral dilemma, coupled with the suspenseful plot, makes for a page-turning drama that will keep you guessing to the very end. Karen Young is in top form."
"Karen Young's stories take my breath away and make me sit up and take notice. In Lie for Me she presents a heroine with an ethical decision that left me biting my fingernails. I wonder if I'd have the strength of character to do what I know was right even if it meant sending the man I loved to prison for the rest of his life. Fast paced, heart-stopping action are Karen's trademarks. She's one of my favorites."
"RITA Award winner Young (Missing Max) brings us a faith-based romantic suspense/thriller, with a great plot full of peril, explosive action, and the nastiest of villains."