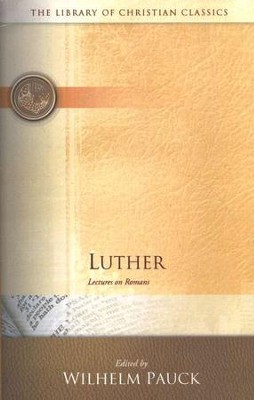 ▼▲
This volume is a collection of Martin Luther's lectures that were given during a class he taught at the University of Wittenberg on the book of Romans. This collection is quite possibly the greatest work by Luther as he addresses all the facets of the epistle in his own sixteenth century, Augustinian monk fashion. This is a verse-by-verse exposition translated from the collection that was not published until the early twentieth century. These lectures were given shortly before the German Reformation took form but you can see in Luther's words the Reformation already forming in his mind.

The Library of Christian Classics has long been acclaimed for its quality translations, introductions, explanatory notes, and indexes. The series ensures that modern English translations of some of the most significant Christian theological works written before the end of the sixteenth century are available for scholars and students, allowing contemporary readers to mine the theological riches of the Christian church though the centuries.

Wilhelm Pauck enhances his fresh translation of Luther's Lectures on Romans with a body of notes which, along with his lucid introduction, greatly enhances the usefulness of Luther's work.

Long recognized for the quality of its translations, introductions, explanatory notes, and indexes, the Library of Christian Classics provides scholars and students with modern English translations of some of the most significant Christian theological texts in history. Through these works--each written prior to the end of the sixteenth century--contemporary readers are able to engage the ideas that have shaped Christian theology and the church through the centuries.

▼▲
Wilhelm Pauck was an influencial historian and theologian. He taught at the University of Chicago in Illinois; Union Theological Seminary in New York City; and Vanderbilt University in Nashville, Tennessee. He is the editor of Luther: Lectures on Romans.

▼▲
I'm the author/artist and I want to review Library of Christian Classics - Luther: Lectures on Romans.
Back
×
Back
×