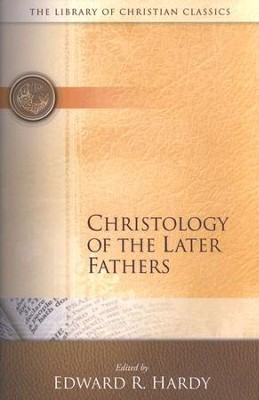 The Library of Christian Classics - Christology of the Later Fathers

▼▲
This volume of The Library of Christian Classics includes important works from three of the leading Christian thinkers of the fourth century, Athanasius, Gregory of Nazianzus and Gregory of Nyssa. The volume also includes a well selected series of documents illustrating the understanding, misunderstanding, and final definition in the Christological controversies from the early fourth to the late seventh centuries, including the Third Council of Constantinople. 400 Pages. Softcover from Westminster John Knox Press.

The Library of Christian Classics has long been acclaimed for its quality translations, introductions, explanatory notes, and indexes. The series ensures that modern English translations of some of the most significant Christian theological works written before the end of the sixteenth century are available for scholars and students, allowing contemporary readers to mine the theological riches of the Christian church though the centuries.

This volume includes selections from the works of Athanasius, Gregory of Nazianzus, and Gregory of Nyssa. Through these works and those of other early Christian thinkers, this book surveys the development of early church theology.

Long recognized for the quality of its translations, introductions, explanatory notes, and indexes, the Library of Christian Classics provides scholars and students with modern English translations of some of the most significant Christian theological texts in history. Through these works--each written prior to the end of the sixteenth century--contemporary readers are able to engage the ideas that have shaped Christian theology and the church through the centuries.

▼▲
I'm the author/artist and I want to review The Library of Christian Classics - Christology of the Later Fathers.
Back
×
Back
×