EARLY CHRISTMAS SALE: Shop over 900 items up to 85% off through 9/29 >
God of Liberty: A Religious History of the American Revolution
By: Thomas S. Kidd 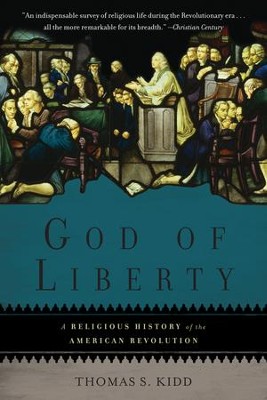 God of Liberty: A Religious History of the American Revolution

▼▲
Before the Revolutionary War, America was a nation divided by different faiths. But when the war for independence sparked in 1776, colonists united under the banner of religious freedom. Evangelical frontiersmen and Deist intellectuals set aside their differences to defend a belief they shared: the right to worship freely. Inspiring an unlikely but powerful alliance, it was the idea of religious liberty that brought the colonists together in the battle against British tyranny.

In God of Liberty: A Religious History of the American Revolution, historian Thomas S. Kidd argues that the improbable partnership of evangelicals and Deists saw America through the Revolutionary War, the ratification of the Constitution, and up to the election of Thomas Jefferson in 1800.

A thought-provoking reminder of the crucial role religion played in the Revolutionary era, God of Liberty represents both a timely appeal for spiritual diversity and a groundbreaking excavation of how faith powered the American Revolution.

▼▲
A "thought-provoking, meticulously researched" testament to evangelical Christians' crucial contribution to American independence and a timely appeal for the same spiritual vitality today (Washington Times). At the dawn of the Revolutionary War, America was already a nation of diverse faiths-the First Great Awakening and Enlightenment concepts such as deism and atheism had endowed the colonists with varying and often opposed religious beliefs. Despite their differences, however, Americans found common ground against British tyranny and formed an alliance that would power the American Revolution. In God of Liberty, historian Thomas S. Kidd offers the first comprehensive account of religion's role during this transformative period and how it gave form to our nation and sustained it through its tumultuous birth -- and how it can be a force within our country during times of transition today.

▼▲
Thomas S. Kidd is Associate Professor of History at Baylor University. The author of several books on topics in American religious history, he lives in Woodway, Texas.

▼▲
Washington Times
“Thought-provoking, meticulously researched ... a salutary reminder of the role religious belief played in the founding of our country ... all the more valuable because that story clearly is in danger of being expunged from the historical record.”

The Weekly Standard
“[An] eloquently argued study.... [Kidd] demonstrates effectively the variety of faiths among Americans of the revolutionary era.”

Christianity Today
“Balanced without being bland, lucid in the telling, Thomas Kidd's chronicle corrects the excesses both of those who overstate the degree to which America was founded as a ‘Christian nation' and of those who seek to minimize the formative role of religion in the new nation's character.”

The Oklahoman
“Full of information about the religion situation of the colonial, revolutionary and early periods of America.... Highly recommended.”
Christian Century
“One of the many virtues of this book is that Kidd is a careful and judicious historian.... He points out—correctly—the errors of both present-day secularists on the left, who insist that the founders barred religious voices from political discourse, and the church-state separation deniers on the right. The lesson of American history is that although church and state are institutionally separate, morality and freedom are seldom at odds and that, in fact, they are mutually reinforcing.”

The Weekly Standard
“Kidd is careful not to adopt an explicitly ‘Christian nation' view of the role of religious faith, especially evangelical Christian faith, in the nation's founding.... But he is unequivocal in stating that the majority of Americans at the time were Christian believers of some kind or other, and that the evangelical component of them (Patrick Henry, for example) played a formative role in creating the new republic.”

▼▲
I'm the author/artist and I want to review God of Liberty: A Religious History of the American Revolution.
Back
×
Back
×