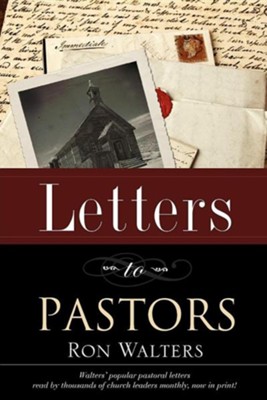 ▼▲
Pastoring? Stress-free? I don't think so "Pastoring is an anomaly. For those of us who heard that unmistakable call from God, it became an offer we couldn't refuse. It fit with our DNA. It's what sounds the trumpets each morning. And, if done properly, it's the single most difficult job we've ever known." Letters to Pastors is the culmination of several years of popular letters written by former pastor Ron Walters. Having been a pastor, Ron knew the challenges that accompanied being in ministry. He wanted to help encourage pastors, to lift them up, and to make their assignments easier. So he began to write a monthly letter to pastors, which he sent to a few dozen in the San Francisco area. Soon his monthly words of encouragement became so popular that more than 50,000 pastors received them monthly. This book contains the best of Ron's letters. They are filled with creative ideas, stories, and helpful information. Ron Walters is vice president for National Programming and Ministry Relations for Salem Communications, America's undisputed leader in providing and distributing Christian- and family-themed content via radio, the Internet, and publishing. See inside book for Ron's biography and visit www.Salem.cc for more information about Salem Communications.

▼▲
I'm the author/artist and I want to review Letters to Pastors.
Back
×