EASTER SEASON SALE: Over 1,100 deals up to 75% off. Shop through March 30th. >
Letters & Papers from Prison
By: Dietrich Bonhoeffer 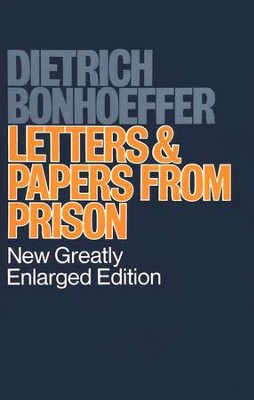 ▼▲
This new, greatly expanded version of Letters and Papers from Prison, while omitting nothing found in the earlier edition, shifts the emphasis of earlier editions on Deitrich Bonhoeffer's theological reflections to the private sphere of his life. Bonhoeffer's letters now appear in far greater detail, and show his daily concerns and the enormous warmth and humanity of the young German pastor who was executed by the Nazis in 1945 for his part in the "officers' plot." References to Bonhoeffer's fiancee and their plans for marriage, omitted in earlier editions, are now included as is her recent article containing excerpts from his personal letters. Letters fro Bonhoeffer's parents, brothers, sisters, and other relatives have been added. The book also contains hitherto inaccessible letters and legal papers referring to Bonhoeffer's trial, a reminiscence of Karl-Friedrich Bonhoeffer of the time spent in prison by members of his family, and a new introduction by Dietrich Bonhoeffer's close friend Eberhard Bethge. These and other pieces--when combined with the historical and theological passages--give aspects of Bonhoeffer's experience a new setting in the context of the war years.

▼▲
One of the great classics of prison literature, Letters and Papers from Prison effectively serves as the last will and testament of the Lutheran theologian Dietrich Bonhoeffer.

Dietrich Bonhoeffer was a young German pastor who was executed by the Nazis in 1945 for his part in the “officers’ plot” to assassinate Adolf Hitler.
This expanded version of Letters and Papers from Prison shifts the emphasis of earlier editions of Bonhoeffer’s theological reflections to the private sphere of his life. His letters appear in greater detail and show his daily concerns. Letters from Bonhoeffer’s parents, siblings, and other relatives have also been added, in addition to previously inaccessible letters and legal papers referring to his trial.
Acute and subtle, warm and perceptive, yet also profoundly moving, the documents collectively tell a very human story of loss, of courage, and of hope. Bonhoeffer’s story seems as vitally relevant, as politically prophetic, and as theologically significant today, as it did yesterday.

▼▲
Dietrich Bonhoeffer was born in Breslau in 1906. The son of a famous German psychiatrist, he studied in Berlin and New York City. He left the safety of America to return to Germany and continue his public repudiation of the Nazis, which led to his arrest in 1943. Linked to the group of conspirators whose attempted assassination of Hitler failed, he was hanged in April 1945.

▼▲
I'm the author/artist and I want to review Letters & Papers from Prison.
Back
×
Back
×