Skip to main content
Letters to Doubting Thomas: A Case for the Existence of God
By: Stephen Layman
Stock No: WW30814X 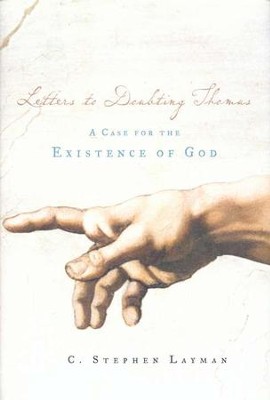 Letters to Doubting Thomas: A Case for the Existence of God

▼▲
This fictional exchange of letters between a philosopher and a college chum brings out the leading arguments on theism vs. naturalism, traditional "proofs" of God's existence, the question of free will, the problem of evil, and the reliability of religious experience---all in an easy-to-digest manner. 336 pages, hardcover.

▼▲
When people encounter an argument for or against God's existence, it often raises more questions than it answers. In Letters to Doubting Thomas, C. Stephen Layman offers a fresh, insightful approach to the issue of God's existence--a way to organize what can seem like a blizzard of claims and
concepts--bringing clarity to a debate often mired in confusion.
Layman explores the evidence for the existence of God in a series of fictionalized letters between two characters--Zachary, a philosopher, and Thomas, an old college friend who appeals to Zach for help in sorting out his thoughts about God. As their correspondence grows, Zachary leads Thomas
through an informal and highly readable comparison of Naturalism (the belief that there is no God and that ultimate reality is physical reality), and Theism (the idea that there is an almighty, perfectly good God). In engaging letters that break down complex philosophical arguments into easily
digestible bits, the two friends delve into such weighty topics as the reliability of religious experience, various arguments for God's existence (such as the cosmological, design, and moral arguments), the question of free will, and the problem of evil. A piece at a time, they build an argument
that shows that Theism, on balance, provides a better explanation of the world and human life than does Naturalism.
Here then is a highly accessible account of the major arguments for and against the existence of God, capturing some of the best new insights of modern philosophy in a marvelously clear and engaging format.

▼▲
"This is the best book of its kind that I have ever seen--a significant accomplishment and a major contribution. There is a substantial need for works on this subject that are accessible and engaging for everyday readers and undergraduates, but without compromising the integrity of the philosophical
arguments. Letters to Doubting Thomas does both."--Noel Hendrickson, James Madison University
"The book is exceptionally clearly written. It presents difficult arguments and concepts without undue technicality, but without sacrificing accuracy. It is a fresh, lively, up-to-date defense of theism."--Wesley Morriston, University of Colorado, Boulder

▼▲
I'm the author/artist and I want to review Letters to Doubting Thomas: A Case for the Existence of God.
Back
Back