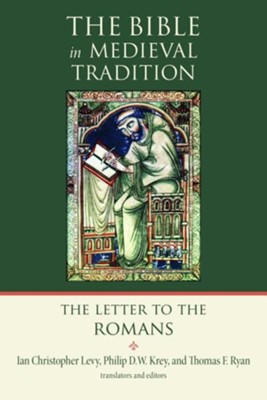 The Letter to the Romans: The Bible in Medieval Tradition

▼▲
This is the second volume of The Bible in Medieval Tradition (BMT), a series that aims to reconnect the church with part of its rich history of biblical interpretation.

Ian Levy, Philip Krey, and Thomas Ryan's Letter to the Romans presents the history of early and medieval interpretations of Romans and gives substantial translations of select medieval commentaries. Written by eight representative medieval interpreters between the ninth and fourteenth centuries, these commentaries have never been translated into English before.

This valuable book will enhance contemporary reading of the Bible even as it lends insight into medieval scholarship. As Levy says, the medieval commentaries exhibit "qualities that many modern commentaries lack: a spiritual depth that reflects their very purpose, namely, to read Holy Scripture within the sacred tradition under the guidance of the Holy Spirit.

▼▲
Ian Christopher Levy is associate professor of theology at Providence College and editor-translator of the BMT volume on Galatians.

▼▲
A judicious selection of medieval Latin commentaries on the Epistle to the Romans....Will be especially illuminating to readers interested in the history of exegesis who do not have much background in medieval theology, for whom the interpretations may be surprisingly rich and sophisticated. A cogent preface places the texts in helpful historical, theological, and literary contexts. Levy, Krey, and Ryan deserve our thanks for making these texts available to students of the Bible at all levels, from undergraduates to professors.
-E. Ann Matter
University of Pennsylvania

This book is a labor of love and a gift given by three of the world's leading interpreters and translators of medieval biblical exegesis. . . . The chronological span taken on is breathtaking, with translations from late antiquity to the dawn of the Reformation. . . . This work altogether successfully defies the stereotype that medieval interpretation was simply parasitic upon patristic exegesis. It will be extremely valuable as a teaching tool.
-Kevin Madigan
Harvard Divinity School

This intelligently presented volume is a model not only in its choice of texts but also for its readable (and learned) introductions and notes. The keen interest in Romans over the centuries explains why Paul's letter is a classic: it provides a surplus of meaning both in the past and in the present day.
-Lawrence S. Cunningham
University of Notre Dame

One cannot understand patristic and medieval theology without careful attention to Romans. This volume, with its excellent introduction and well-balanced series of translated texts, is an impressive contribution to making the riches of medieval exegesis available to contemporary readers.
-Bernard McGinn
University of Chicago Divinity School

▼▲
I'm the author/artist and I want to review The Letter to the Romans: The Bible in Medieval Tradition.
Back
×
Back
×