Skip to main content
Red Letter Revolution: What if Jesus Really Meant What He Said
By: Shane Claiborne, Tony Campolo
Stock No: WW204180 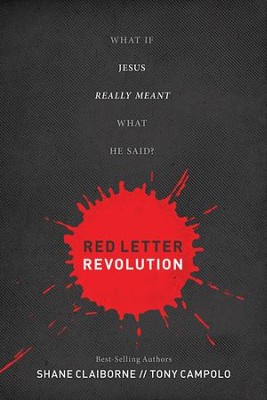 Red Letter Revolution: What if Jesus Really Meant What He Said

▼▲
Claiborne and Campolo take on the political, economic, and religious patterns that aren't working anymore! Focusing on the words of Christ---the "red letters"---they show that Jesus' example is still relevant, and call us back to a Christianity centered on him. Conservatives, progressives, skeptics, and believers will better understand the world-transforming power of Jesus' message. 256 pages, hardcover from Nelson.

For all the Christians facing conflict between Jesus’ words and their own lives, for all the non-Christians who feel they rarely see Jesus’ commands reflected in the choices of his followers, Red Letter Revolution is a blueprint for a new kind of Christianity, one consciously centered on the words of Jesus, the Bible’s "red letters."

Framed as a captivating dialogue between Shane Claiborne, a progressive young evangelical, and Tony Campolo, a seasoned pastor and professor of sociology, Red Letter Revolution is a life-altering manifesto for skeptics and Christians alike. It is a call to a lifestyle that considers first and foremost Jesus’ explicit, liberating message of sacrificial love.

Shane and Tony candidly bring the words of Jesus to bear on contemporary issues of violence, community, Islam, hell, sexuality, civil disobedience, and twenty other critical topics for people of faith and conscience today. The resulting conversations reveal the striking truth that Christians guided unequivocally by the words of Jesus will frequently reach conclusions utterly contrary to those of mainstream evangelical Christianity.

If the Jesus who speaks to you through the Gospels is at odds with the Christian culture you know, if you have ever wanted to stand up and say, "I love Jesus, but that’s not me," Red Letter Revolution will prove that you are not alone—you may have been a Red Letter Christian all along.

"This book, by a young and an elderly Christian, will help you decide how we Christians could change the world if we took the ’red letter’ words of Jesus literally and seriously." —President Jimmy Carter

"In Red Letter Revolution the uncompromised truth of Jesus' teachings are given voice by two modern-day Christian leaders who do more than preach this Good News. They walk the talk and lead the way." —Archbishop Desmond Tutu

"I started reading this book and couldn't stop. . . . Thank you, Tony and Shane. Thank you for this book. May the movement spread around the world." —Abuna Elias Chacour,?Melkite Catholic Archbishop of Galilee

"I cannot over-emphasize or exaggerate the richness of this book." —Phyllis Tickle, author of Emergence Christianity

"In this courageous and well crafted book, we have a return to the core message of the Gospel from two Christians who first tried to live it themselves—and only then spoke." —Fr. Richard Rohr, O.F.M., Center for Action and Contemplation

"Shane Claiborne and Tony Campolo are two of the most significant prophetic voices in the Christian world." —Rabbi Michael Lerner, editor of Tikkun Magazine (tikkun.org)

"This is a must-read book for anyone who is seeking to take Jesus’ call on their lives seriously." —Jim Wallis, founder and editor of Sojourners magazine

"If you ever wished you could eavesdrop on a conversation with two of the world's most interesting and inspiring Christians, just turn to page one." —Brian D. McLaren, author/speaker (brianmclaren.net)

Shane Claiborne is a prominent speaker, activist, and bestselling author. Shane worked with Mother Teresa in Calcutta and founded The Simple Way in Philadelphia. He heads up Red Letter Christians, a movement of folks who are committed to living "as if Jesus meant the things he said." Shane is a champion for grace, which has led him to jail advocating for the homeless, and to places like Iraq and Afghanistan to stand against war. Now, grace fuels his passion to end the death penalty.

Shane’s books include Jesus for President, Red Letter Revolution, Common Prayer, Follow Me to Freedom, Jesus, Bombs, and Ice Cream, Becoming the Answer to Our Prayers, his classic The Irresistible Revolution, Executing Grace, and Beating Guns. He has been featured in a number of films, including Another World Is Possible and Ordinary Radicals. His books have been translated into more than a dozen languages. Shane speaks over one hundred times a year, nationally and internationally. His work has appeared in Esquire, SPIN, Christianity Today, the New York Times, and the Wall Street Journal, and he has been on everything from Fox News and Al Jazeera to CNN and NPR. He’s given academic lectures at Harvard, Princeton, Liberty, Duke, and Notre Dame.

Shane speaks regularly at denominational gatherings, festivals, and conferences around the globe.

Tony Campolo (Ph.D., Temple University) is professor emeritus of sociology at Eastern University in suburban Philadelphia, a media commentator on religious, social, and political matters, and the author of a dozen books, including Revolution and Renewal, Let me Tell You a Story, and 20 Hot Potatoes Christians Are Afraid to touch.

▼▲
I'm the author/artist and I want to review Red Letter Revolution: What if Jesus Really Meant What He Said.
Back
Back