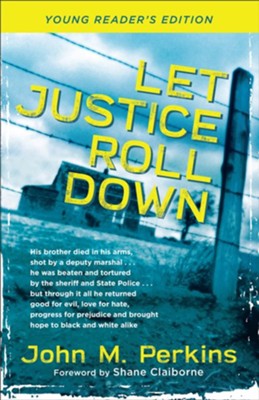 ▼▲
His brother died in his arms, shot by a deputy marshal. He was beaten and tortured by the sheriff and state police. But through it all, he returned good for evil, love for hate, and progress for prejudice, and he brought hope to black and white alike.

The story of John Perkins is a gripping portrayal of what happens when faith thrusts a person into the midst of a struggle against racism, oppression, and injustice. It is about the costs of discipleship--the jailings, the floggings, the despair, the sacrifice. And it is about the transforming work of faith that allowed John to respond to such overwhelming indignities with miraculous compassion, vision, and hope.

Perhaps more now than ever, young people need to read his story. This youth edition of the book Christianity Today named as one of the top fifty books that have shaped evangelicals will inspire a new generation to seek justice, love mercy, and walk humbly with God in the face of radical social change.

▼▲
John M. Perkins is cofounder of the Christian Community Development Association and director of the John M. Perkins Foundation for Reconciliation and Development in Jackson, Mississippi. He is the author of many books, including Dream with Me and Let Justice Roll Down, named by Christianity Today as one of the top fifty books that have shaped evangelicals.

▼▲
I'm the author/artist and I want to review Let Justice Roll Down, young reader's ed..
Back
Back