Skip to main content
CYBER MONDAY IS HERE! Shop savings up to 88%. >
Les Miserables
By: Victor Hugo
Stock No: WW300021 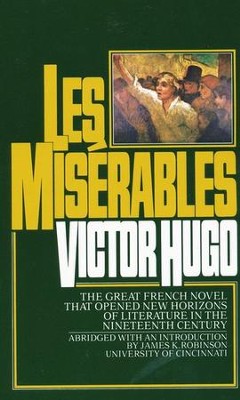 ▼▲
Sensational, dramatic, packed with rich excitement and filled with the sweep and violence of human passions, Les Miserables is not only a superb adventure but a powerful social document. The story of how the convict Jean Valijean struggles to escape his past and reaffirm his humanity in a world brutalized by poverty and ignorance became the gospel of the poor and the oppressed. One of the greatest works in Western literature, Les Miserables is an exhilerating and deeply profound reading experience.

▼▲
Few novels ever swept across the world with such overpowering impact as Les Mis&eacute;rables. Within 24 hours, the first Paris edition was sold out. In other great cities of the world it was devoured with equal relish.

Sensational, dramatic, packed with rich excitement and filled with the sweep and violence of human passions, Les Mis&eacute;rables is not only superb adventure but a powerful social document. The story of how the convict Jean-Valjean struggled to escape his past and reaffirm his humanity, in a world brutalized by poverty and ignorance, became the gospel of the poor and the oppressed.

▼▲
Victor Hugo (1802-85), novelist, poet, playwright, and French national icon, is best known for two of today’s most popular world classics: Les Mis&eacute;rables and The Hunchback of Notre-Dame, as well as other works, including The Toilers of the Sea and The Man Who Laughs. Hugo was elected to the Acad&eacute;mie Fran&ccedil;aise in 1841. As a statesman, he was named a Peer of France in 1845. He served in France’s National Assemblies in the Second Republic formed after the 1848 revolution, and in 1851 went into self-imposed exile upon the ascendance of Napoleon III, who restored France’s government to authoritarian rule. Hugo returned to France in 1870 after the proclamation of the Third Republic.

Julie Rose’s acclaimed translations include Alexandre Dumas’s The Knight of Maison-Rouge and Racine’s Ph&egrave;dre, as well as works by Paul Virilio, Jacques Ranci&egrave;re, Chantal Thomas, and many others. She is a recipient of the PEN medallion for translation and the New South Wales Premier’s Translation Prize.

Adam Gopnik is the author of Paris to the Moon and Through the Children’s Gate, and editor of the Library of America anthology Americans in Paris. He writes on various subjects for The New Yorker and has written introductions to works by Maupassant, Balzac, Proust, and Alain-Fournier.

▼▲
"Rich and gorgeous. This is the [translation] to read&hellip; and if you are flying, just carry it under your arm as you board, or better still, rebook your holiday and go by train, slowly, page by page."—Jeanette Winterson, The Times (London)

"A new translation by Julie Rose of Hugo’s behemoth classic that is as racy and current and utterly arresting as it should be."—Buffalo News (editor’s choice)

"Vibrant and readable, idiomatic and well suited to a long narrative, [Julie Rose’s new translation of Les Miserables] is closer to the captivating tone Hugo would have struck for his own contemporaries."—Diane Johnson

"A lively, dramatic, and wonderfully readable translation of one of the greatest 19th-century novels."—Alison Lurie

"Some of us may have read Les Miserables back in the day, but&hellip; between Gopnik and Rose, you’ll get two introductions that will offer you all the pleasures of your college instruction with none of the pain."—The Agony Column

▼▲
I'm the author/artist and I want to review Les Miserables.
Back
Back