Skip to main content
CYBER WEEK SALE! Spot great deals up to 88% off. >
Legislating Morality: Is It Wise? Is It Legal? Is It Possible?
By: Norman L. Geisler, Frank Turek
Stock No: WW441525 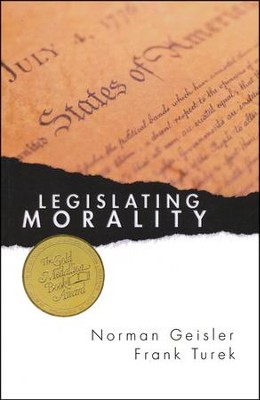 Legislating Morality: Is It Wise? Is It Legal? Is It Possible?

Whose Morality Should We Legislate?

America's moral decline is no secret. An alarming number of moral and cultural problems have exploded in our country since 1960-a period when the standards of morality expressed in our laws and customs have been relaxed, abandoned, or judicially overruled.

Conventional wisdom says laws cannot stem moral decline. Anyone who raises the prospect of legislation on the hot topics of our day-abortion, family issues, gay rights, euthanasia-encounters a host of objections:

"As long as I don't hurt anyone the government should leave me alone."

"No one should force their morals on anyone else."

"You can't make people be good."

"Legislating morality violates the separation of church and state."

Legislating Morality advocates a moral base for America without sacrificing religious and cultural diversity, debunking the myth that "morality can't be legislated" and amply demonstrating how liberals, moderates, and conservatives alike exploit law to promote good and curtail evil. This book boldly challenges prevailing thinking-about right and wrong and about our nation's moral future.

▼▲
I'm the author/artist and I want to review Legislating Morality: Is It Wise? Is It Legal? Is It Possible?.
Back
Back